This Geek Chic Dr. Who Wedding Is Out of This World 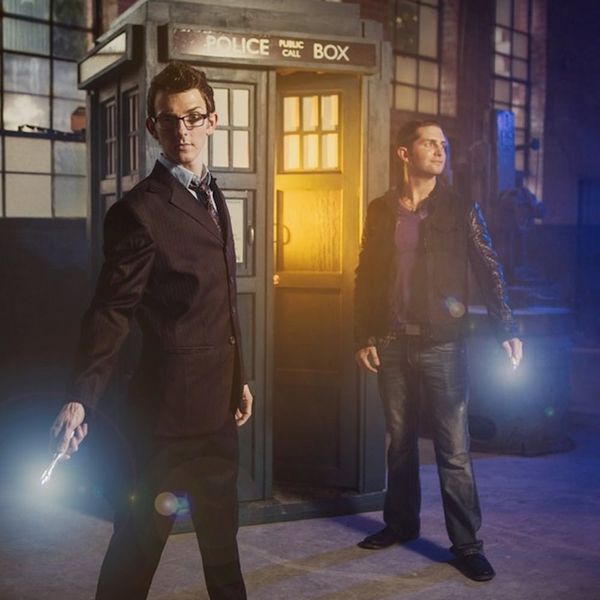 A pop culture theme wedding can either go one of two ways: totally spot on or terribly tacky. Lucky for Dallas-based couple, TJ and Timmy Mundell-Patterson, their Dr. Who themed nuptials were anything but a sci-fi disaster. The two went viral last year when they released their engagement shoot, which was complete with a custom built TARDIS and shot in an abandoned warehouse. Aside from creating something that looks more like a promo for the show than an engagement series, TJ even looks like a total doppelganger for the 10th Doctor (AKA David Tennant).

While it might seem impossible to outdo the epic photos, the couple has managed it with a Dr. Who themed wedding AND honeymoon. TJ and Timmy headed to the Hakone Japanese Gardens in Saratoga, California this past November to officially tie the knot. Their ceremony was complete with a Dr. Who-themed cake, TARDIS and K-9 (the robot dog) shaped ring boxes and heartwarming inscriptions from the show on their wedding vests.

After the two said “I do” they headed off to a honeymoon in the UK (because, duh). While across the pond, they were granted access to BBC studios in Cardiff where they were welcomed aboard the set and visited several archived console rooms – they even got to snap a pic in Van Gough’s hat from the episode “Vincent and The Doctor.”

Outside of the studios, the scoured the country in search of Pandorica (a prison hidden under Stonehenge – fictional of course) and fused two of BBC’s best sci-fi shows into one by placing a miniature TARDIS in Cardiff Bay’s Mermaid Quay, where the Dr. Who spinoff show, Torchwood is set.

Who needs the Bahamas and couple massages when you have a portable TARDIS and so much sci-fi goodness to explore?!

Have you ever been to a themed wedding? What was the theme? Did you love it or think it was a bust? Share your thoughts with us in the comments below.