This TV-Themed Wedding Will Totally Make You Fall in Love 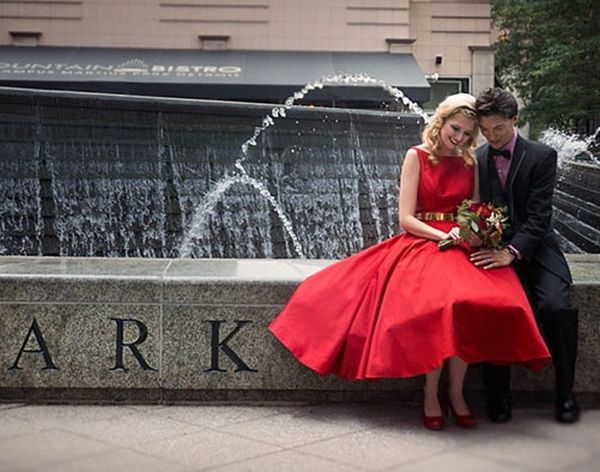 Themed weddings can go one of two ways: utterly amazing or totally tacky. Whether you’re an animal lover or a travel addict there are a million ways turn your big day into an ode to your favorite things — whatever that may be. But what about your favorite TV show? Well, why not! Set your DVR to this expertly executed Parks and Rec-themed wedding.

Every year, Michigan-based wedding photogs Trish and Patrick Hadley put together an inspiration shoot with various vendors. This year they found themselves feeling a little uninspired. “I mean, who needs to see yet ANOTHER boho or Great Gatsby inspiration shoot?” The Hadleys wrote on their blog. So while they were binge watching Parks and Rec they had an epiphany. Sure, the show is a comedy at its core, but there are plenty of heart-warming moments involving Leslie Knope and her love waffle, Ben Wyatt.

Looks like a drink fit for Ron Swanson if we ever saw one.

And a cake perfect for Leslie. From the venue to the giant stack of waffles, the shoot is oozing with subtle references to the show. The Hadleys shot the fake wedding at Cliff Bells, a jazz club in Detroit where he felt the legendary Ron Swanson could be caught performing in as his saxophonist alter-ego, Duke Silver. The invites also included an illustration of two penguins, a throwback to when Leslie accidentally became an advocate for gay marriage when she married two male penguins at the zoo.

As for the unconventional red dress, Trish said she noticed that every time Leslie and Ben hit a relationship milestone, she was dressed in red. Her hair was styled to mock how it looked in that cringeworthy painting of her as a centaur. Ben’s affinity toward checkered shirts was also noted in his ensemble.

This may be a “fake” wedding, but it’s still one of our favorites and could serve as inspiration for your own themed wedding — pop culture or otherwise! For fellow Parks and Rec-crazed attendees, there are plenty of elements for them to fan out over throughout the day, but even if you’ve never seen the show before, everything is still totally beautiful in its own right. When opting for a definitive theme, subtly can go a long way. Visit the Hadley’s website for more photos and to see some of their other wedding work!

If you were doing a themed wedding based on a TV show, which show would you pick? How would you do it? Share your ideas with us in the comments below.