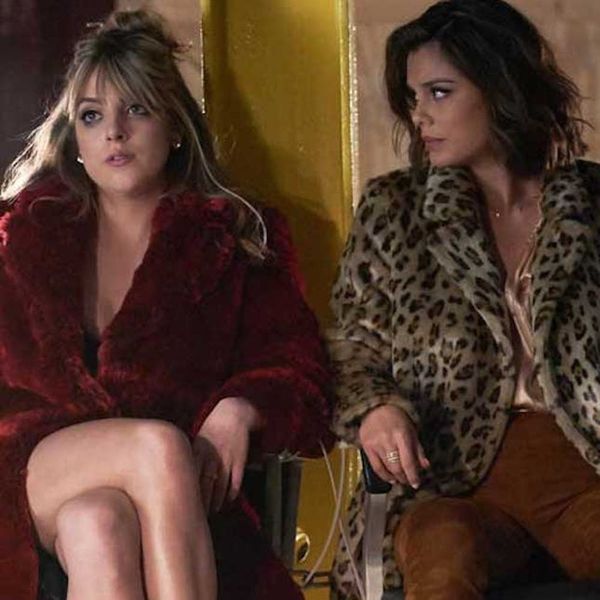 It’s all hands on deck for the latest Dynasty episode, “I Answer to No Man,” because Fallon has been kidnapped by Sam’s parents, and they want their pound of flesh for getting duped in last week’s episode.

Apparently, Alejandro can’t go back to Venezuela without any money, so he wants $15 million from Blake. As Blake kicks into high gear, telling Cristal that there will be no cops involved and that he’ll handle it, Fallon runs her mouth to her kidnappers and gets the ransom upped to $25 million, which Blake doesn’t have immediate access to. So that’s a sticky wicket.

Luckily, Michael calls in Jeff Colby, who insists that as Fallon’s partner (in more ways than one), he counts as family and should be allowed to help. He brings $8 million in cash and jewelry, which brings them up to $19 million total. They’re hoping they can give it to Alejandro and get Fallon to safety before he realizes it’s less than what he asked for.

Since Blake won’t let Jeff or Michael help with the money-hostage exchange, they decide to start their own investigation. They track down Fallon’s new Porsche in an empty parking structure, and Jeff starts to get really worried. He wants to call in the real authorities, but Michael says no — so they fight. It’s pretty great.

Meanwhile, the new police chief, Jeff’s cousin Bobbi, stops by the Carrington house because Blake and Cristal had been wooing her for her endorsement for Blake’s cousin’s senate run and forgot to cancel their dinner plans. So they’re trying to act casual while Blake sets his security in place at the Fulton County Airport to make the exchange. But Sam is worried about his parents’ lives, so Cristal takes the Bentley to meet with Alejandro by herself. Alejandro doesn’t want jewels, so he takes Cristal hostage too.

But Jeff’s no dummy. He put a tracker on the jewelry and they can track the bags of cash and jewels, so now Blake, Jeff, and Michael are riding to the rescue (with a little help from Jeff’s cousin Bobbi).

But Fallon and Cristal have actually been doing some good work on their own. Fallon plants some seeds with Iris that Alejandro is a psycho who doesn’t actually love her, and she’s proved right when Alejandro gets mad and slaps Iris hard across the face. Then Cristal uses Fallon’s hairpin to saw at their plastic ties. They get free and Cristal saves Fallon with the old hairspray and lighter trick, but then Iris pulls a gun and she and Alejandro get away with Cristal.

Cristal keeps poking Iris about staying with Alejandro, imploring her to leave him before he kills her or gets her killed. So the sisters ambush him and free themselves, with Iris shooting Alejandro dead as he tries to strangle Cristal. Cristal gives Iris money and tells her to run, later telling the cops that Iris was a victim as much as she and Fallon were. She takes the blame for shooting him.

Fallon steps up big time and supports Cristal’s story to the cops. And Jeff says he’ll talk to his cousin about endorsing Blake’s cousin for the senate.

The parting shot as the party breaks up is that Michael doesn’t trust Jeff as far as he can throw him and tells Jeff he’s loyal to the Carringtons, so he’ll be keeping a close eye on Jeff from now on.

In a touching wrap-up scene, Anders pours Sam a drink and checks in about how he’s doing. Sam says Anders has been more of a father to him than Alejandro ever was. Awww.

But wait, that’s not the only sentimental moment. Blake reveals to Cristal that before Fallon and Steven were born, he and Alexis had a six-month-old son who was kidnapped, and he hasn’t seen Adam since. Steven and Fallon don’t even know about it, but he wasn’t about to lose another child. Whoa.

And finally, Fallon tells Jeff she wants to make it on her own, so she wants to buy him out. Well, that’ll put a wrench in Jeff’s plans to get married to Fallon and get access to all of her money.

This bit about Adam is super juicy because it means the writers can introduce another Carrington child at whatever time they see fit. This is also a great nod to the original Dynasty, which introduced Adam Carrington in season 3. Originally he was going to be an imposter, but they decided they liked him so much that they made him legit and kept him around. Fun stuff!

Love the Anders-Sam interactions. They’ve been really fun all season, and this really tied it all together.

Having Jeff’s cousin “Bobby” turn out to be a woman was excellent. I did not see that coming at all, and I love it when a show surprises me, even with something as minor as that.

Steven: “When will he call with the meeting point?”

Anders: “Last minute. He wouldn’t want us getting there ahead of him and setting a trap. All we can do is wait.”

Steven: “Do you… kidnap many children on your day off?”

Fallon: “They might have stolen my hair, but they can never steal my hustle.”