‘Dynasty’ Is Back With a Vengeance (in More Ways Than One) 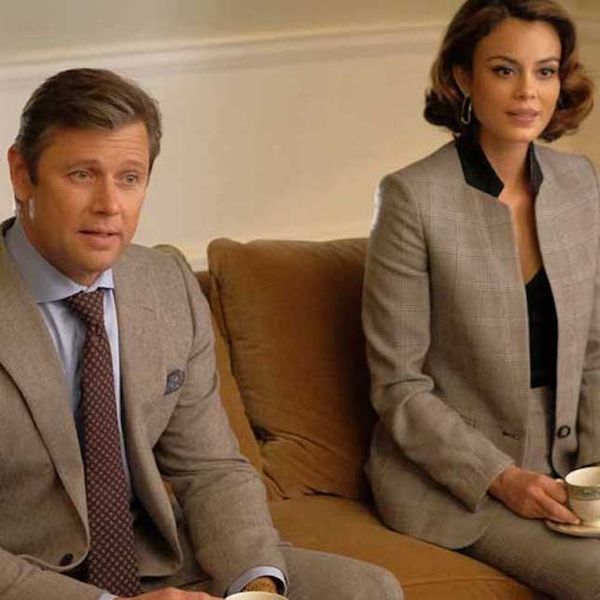 Dynasty is back after a small break, and it’s just as nuts as ever. If you’ll recall, when we last saw the Carringtons and their frenemies, Jeff and Monica Colby got their dad out of prison, and they’re all dead-set on taking down the Carringtons. Oh, and Steven’s unstable ex-boyfriend jumped out of Steven’s apartment window with Sam’s bloody earring in his hand, so it looks like he’s trying to frame Sam for his murder.

And now we jump back into the fray with Cecil Colby and Blake Carrington having a gross-off to see who can be more disgusting about their loved ones.

Sam is freaking out because not only does it look like he killed Ted, but his papers are no longer valid and he’s in the country illegally. Steven tells Sam to go hide out at the mansion — he was never there.

Steven starts to spin a story for the cops of how his back was turned when Ted fell/jumped, when suddenly Ted’s bloody body has a pulse. Ruh roh. So now Steven has to play the politician and pretend like he’s grieving because his “partner” is critically injured.

Later, Sam and Steven have a moment and share a kiss, which is going to gum things up a little bit, but the more immediate problem is Ted’s father Jerry, who is livid about Steven using his son’s condition for political gain. When Ted wakes up, he starts talking about Sam, but Jerry doesn’t suspect anything because he believes Steven is the grieving partner. Jerry swallows Steven’s story so completely that he tells the press what a great guy Steven is and leaves town to take Ted to rehab.

Sam decides he should just leave the country and relieve everyone’s burden, but Anders figures out what he’s up to and sets him up with an immigration lawyer. Awww. But he and Steven can’t be together after this whole thing with Ted, so Sam has lost out on that because Steven so desperately wants to win this council seat election. So Sam is in the clear and will start the process to become a citizen, but his heart is a little bit broken.

Meanwhile, Fallon and Michael are trying to figure out why the Colby children hate the Carringtons so much, and Fallon is going to stay engaged to Jeff as long as it takes to get to the bottom of things. Fallon realizes that Jeff bugged their house and is spying on their emails and texts, so Michael brings in someone to thwart Jeff’s efforts — and we get to meet his little sister Evie, a 17-year-old senior at Emory who is a totally badass hacker. More of her, please.

At dinner with Cecil, Jeff suggests they get married ASAP and since Fallon doesn’t have a reason to say no, she agrees. But Cecil manages to “ruin” it all by freaking out about his children cozying up to the daughter of the man who put him in prison and slept with his wife. Fallon is gobsmacked to hear what Cecil claims her father did, but at least she doesn’t have to get married to Jeff just yet.

Fallon is starting to realize that what her dad always told her about her mom is probably all lies, while Jeff’s plan is put on hold because Cecil is taking over now.

Except, when Fallon confronts her father about all of it, he insists Fallon go through with the wedding to keep them close to the Colbys. So it looks like next week is going to be a nice day for a white wedding.

Oh, and remember how Cristal kissed her reporter friend, Rick? Well, he’s now pursuing her pretty hard and Cristal is freaking out. She tells Blake that Rick kissed her and that it’s a harmless crush, but Blake has found out that Rick is working for the Colbys to take Blake down, so he needs Cristal to cozy up to Rick to find out what they’re planning.

She’s furious that Blake would whore her out (and she’s right to be), but she’s also trying to cover for the feelings she has for Rick.

Either way, it’s gross how easily Blake is willing to use the women in his life so cavalierly, pawning them off on whoever will help his situation the most. Sure, they call him on it sometimes, but they still go through with it. When is that going to come back to bite Blake?