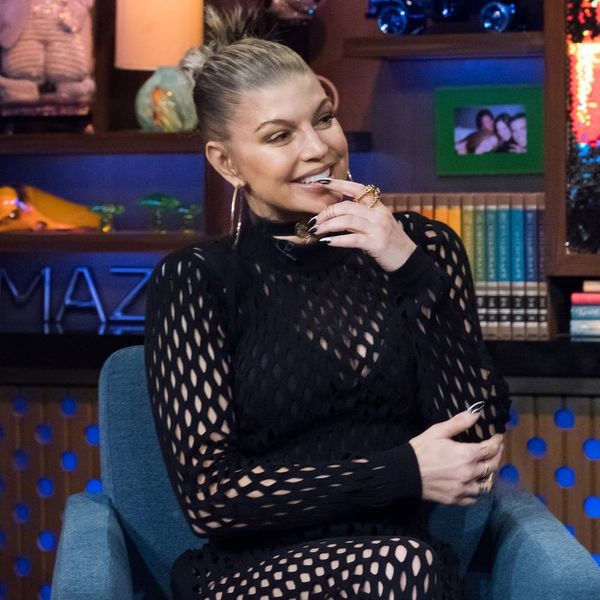 We’ll forgive you if you didn’t know that Fergie (Stacey Ferguson) dated Justin Timberlake back in 1996. It was more than 20 years ago, and by all accounts, the relationship was fleeting. During Ferguson’s first-ever appearance on Watch What Happens Live With Andy Cohen this week, the host quizzed the singer about their fling during a round of “Plead the Fifth,” and she quickly zipped her lips.

In “Plead the Fifth,” Cohen asks his guests a series of questions, which the interviewees have to answer. They’re allowed to plead the fifth to one, but the questions are always personal, so it can be hard to choose. It’s clear from Fergie’s time in the hot seat, though, that she’s not super comfortable talking about the time she (at age 23) dated a 16-year-old boy bander.

The line of questioning began with Cohen asking the Black Eyed Peas singer about her former Kids Incorporated costar Mario Lopez, who famously spilled the beans on their preteen romance in his 2014 memoir and named Ferguson as his first kiss. “How would you rate his kissing skills on a scale from 1 to 10?” Cohen asked.

Fergie gave Lopez a 10 out of 10, complimenting the actor and TV presenter’s “beautiful, soft lips,” before explaining that their romance was short lived, in part because Lopez pitted her against one of her friends, singer and actress Renee Sands (her Kids Incorporated costar and Wild Orchid bandmate), in an emotional game. “He would play Renee and me and our feelings — our little girl feelings! He’s got that Latin lover thing,” she quipped, before Cohen’s other guest, Empire star Jussie Smollet, jokingly called Lopez, “Mario HO-pez,” to some mega laughter.

Question two involved Cohen trying to get Fergie to name her least favorite Josh Duhamel project. The “You Already Know Performer” — who recently announced her (clearly amicable) split from Duhamel — couldn’t name a movie she didn’t love, but she did say she hated his friends’ “toilet talk” group texts. “You know what I’m talking about!” she joked, shouting out his crew.

Finally, Cohen brought up that 1996 romance with Timberlake, which prompted a lot of uncomfortable twisting and turning. She finally said, “It wasn’t all that serious. Am I allowed to pass on this? Pass!”

Back in 2006, however, the pop star was more forthcoming about her time with Timberlake, telling Cosmo, “One of my good friends was dating J.C. Chasez, and so we’d all hang out with *NSYNC. Justin and I would go out together and have fun and make out. We went to Hawaii together, but we were never serious. He was Mr. Right Now.”

Guess it’s true that we all have at least one embarrassing ex!

Do you have an embarrassing ex? Tell us @BritandCo!