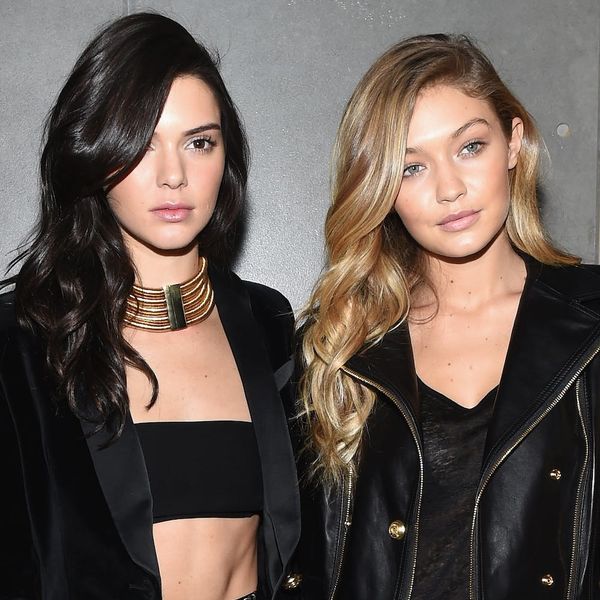 Gigi Hadid (whose recent BSB cover for Lip Sync Battle is still being talked about) and Kendall Jenner are totally dominating the modeling world these days. Part of their job description is being able to change their style at the drop of a hat, but off-duty, they’re instantly recognizable thanks to their respective signature looks — Gigi as the blonde bombshell and Kendall Jenner as the classic brunette. In the name of fashion and for their mutual friend, Balmain Creative Director Olivier Rousteing, the supermodel BFFs recently walked Balmain’s show at Paris Fashion Week with swapped hair colors.

Balmain’s official Instagram posted this snap of the models with their pal Olivier. Holy cow, you can hardly recognize Gigi with nutmeg-hued tresses. Her little sister and fellow model, Bella, has always been the dark-haired one in the family. But in this pic, the sisters are definitely twinning hardcore. As for Kendall, her new look is a total departure from her family’s. She went blonde with exposed roots — and we have to say, this edgier look suits her surprisingly well.

If you need another look at their new shades, Kendall posted a pic of the two friends taken after the show with the caption: “#KenGi swap — post@balmain.” We suspect neither are going to keep these new colors for long (they’re probably wigs anyway), so let’s enjoy it while it lasts. Serious props though. It takes a lot of guts to bite the bullet and go for that new color you’ve always wanted to try. Perhaps this might just be the inspiration we all need to call up our stylists and try out some radical new hair hues!

What do you think of their new hair colors? Tweet us @BritandCo!

Kimberly Wang
Kimberly Wang writes about all things pop culture, tech, style, and beauty. She's a Bay Area transplant and has an MFA in Creative Writing from Columbia University. On a sunny New York day, you can find her hanging out with her mini schnauzer Isabelle Jellybean on a blanket in Central Park.
Celebrity Hair
Beauty News
Celebrity Hair Hair Color
More From Beauty News