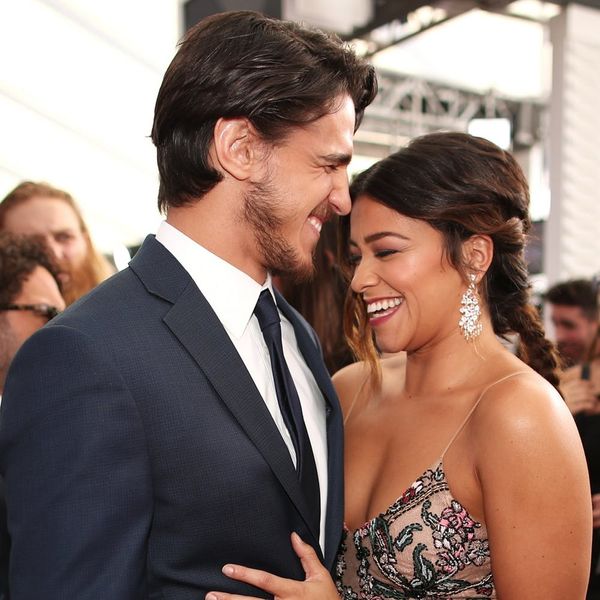 Is Gina Rodriguez celebrating more than just her birthday today? The Jane the Virgin star, who just turned 34, sparked speculation that she’s engaged to actor and model Joe LoCicero after posting an Instagram photo of herself wearing what appears to be a new diamond ring on her left hand.

“34. ‘They thought I was a Surrealist, but I wasn’t. I never painted dreams. I painted my own reality.’ – Frida,” the actress wrote alongside the pic, which was taken on the couple’s vacation in Mexico. The caption doesn’t mention a proposal, but the ring on Rodriguez’s finger has been the subject of much chatter in the comments section, and Us Weekly cited a source claiming that the pair are indeed engaged.

Rodriguez also posted a photo of herself and LoCicero to her Instagram stories. In the pic, she rests her head on his shoulder and touches his bare chest with her hand, which is once again positioned perfectly to show off that mysterious ring.

LoCicero, for his part, took to Instagram earlier in the day to share several photos of Rodriguez, including one of her wearing the ring, in honor of her turning 34. “Happy birthday my love!” he captioned the slideshow.

The pair made their red carpet debut in November 2016 at Marie Claire’s first annual Young Women’s Honors gala, which Rodriguez hosted. She later revealed during an interview for Live With Kelly and Ryan that they’d met earlier that year, when he appeared on Jane the Virgin as a stripper, a moment she described as “serendipitous!”

In February, the actress talked with Self about LoCicero, saying, “[He] has really helped me have a healthier perspective on [weight], that stupid number that can destroy us and feel like it’s equivalent to our self-worth.” She added that their “love is so easy,” and their relationship is full of “respect and kindness, and generosity, and compromise, and sacrifice.”

Do you think Gina Rodriguez and Joe LoCicero are engaged? Let us know @BritandCo!