‘GLOW’ Might Make You Feel Uncomfortable, and That’s Okay 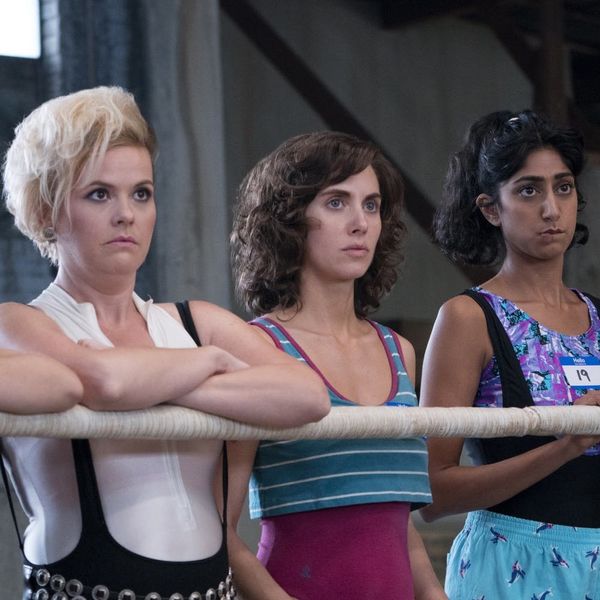 In many ways, Netflix’s GLOW is empowering for both its characters and the stars who play them. Betty Gilpin and Alison Brie, for example, have talked at length about their positive experiences on the show, including strength-building physical training and having women run things behind the scenes. It’s refreshing to see a show that features women front and center, but the real-life ’80s variety show that GLOW is based on wasn’t perfect, and some of that controversy plays out in the Netflix series too.

The first season of the Netflix series showed the GLOW ladies being assigned their wrestling personas. Many of the women of color were shuffled into stereotypes like “Fortune Cookie” and “Welfare Queen.” Meanwhile, Brie’s character, Ruth, gets to undergo a brief period of self-exploration, because she doesn’t automatically fall into a race-based stereotype. The show isn’t condoning the stereotypical characters, but it’s still uncomfortable to watch the women of color have to play into them.

GLOW executive producer and co-creator Liz Flahive addressed the stereotypes in an interview with Vanity Fair last year. “There are things that are incredibly offensive in wrestling, and that was very interesting to us,” she told the magazine. “We wanted to see our girls grapple with the stereotypes of the time and what they were being asked to deal with in the name of a job.”

In some ways, the stereotypes, and the sexist mistreatment the women sometimes face, are what bring the GLOW characters together. The women form bonds with one another, making the wrestling experience fun for all of them, even if what they’re doing was created with the male gaze in mind. The fact that GLOW is true to its inspiration isn’t a bad thing. If anything, it shines a light on the struggles many women have faced while trying to make a living as actors, as Flahive suggested.

Still, it’s okay if the stereotypes and male-gaze attitudes make GLOW viewers uncomfortable — in fact, it seems like that’s part of the point. It’s normal to be discomforted by sexism and racial stereotypes. And the fact that the show imparts those mixed emotions means it’s addressing its inspiration in a true-to-life way.

Will you be watching GLOW‘s second season on Friday? Let us know @BritandCo!

Meghan DeMaria
Meghan is a freelance journalist based in New York City. She is obsessed with TV, especially sitcoms. She's previously worked at Refinery29 and TheWeek.com and has written for Bustle, Women's Health, and more. When she's not writing, Meghan can be found looking for the best pulled pork New York has to offer.
Netflix
TV
Netflix TV
More From TV