Gear Up for the Grammys: 10 Graphic Tees Inspired by Our Favorite Nominees 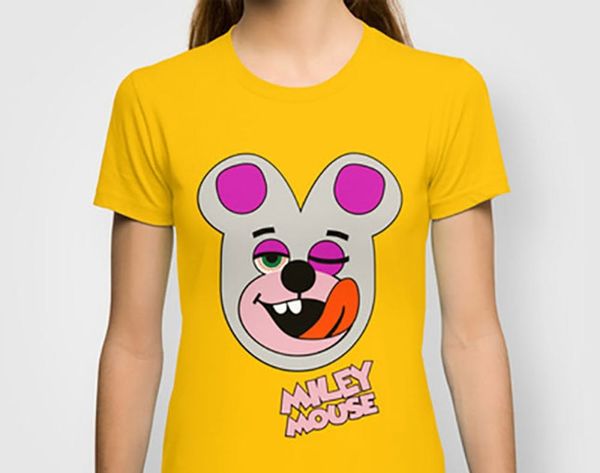 Pop music fans, get pumped — the Grammys are just around the corner! We’re stoked as ever to watch the award show that brings together our absolute fave chart toppers of the past year into one raucous room. So to celebrate, we’re literally gearing up for the big show. And you can too, with these 10 graphic tees inspired by top nominated artists. From Miley’s naughty mouse to Lorde’s cheeky lyrics, let each adorned tee act as a ballot that shows everyone exactly where your loyalty stands. Be sure to click on the song titles throughout the post to rock out while you read!

1. Drake ($23): Every girl has that moment when they’ve fallen in love with Started From the Bottom rapper Drake. Whether it was during his early-on acting career (Degrassi people!), when he coined the most buzzworthy hashtag known to modern man (#YOLO), or after he killed it as host/musical guest on SNL this past weekend (watch ‘yo back JT!). Since we can’t give this hard workin’ man a hug ourselves, we’re showing our support with this high design tee (and maybe also with this Drake Shake app…)

2. Lorde ($22): It’s no secret that Lorde is the hippest kid on the block (seriously, she’s 16 and she rocks the purple lip look like no one else). With a low, breathy voice that so dryly makes fun of fame’s ridiculous excesses on her smash single Royals — some of which are named on this checklist tee — it’s obvious, once again, that this chick is wise beyond her years.

3. Miley ($22): Sending shockwaves straight through the television screen during her now infamous VMA performance, Miley proved that she practices what she preaches — doin’ whatever she wants and takin’ nothin’ from nobody, just like she sings in her big girl breakout single, We Can’t Stop. We have to admit, we can’t stop wondering what she’ll do next.

5. Rihanna ($22): At 25, Rihanna is already an icon—literally, she was given the first-ever Icon Award at the AMAs last year, and it’s easy to see why: she has a sick sense of style, a penchant for striking visuals, and one seriously strong voice, which is the main feature of her 2012 smash Diamonds. Shine bright like one in this graphic tee.

6. Taylor Swift ($27): You definitely don’t have to be 22 to do a lot of the geeky and goofy things T.Swift sings about on her infectious young-n-wild anthem. But now it’s easier than ever to dress up like a hipster thanks to this hot pink tank. Unfortunately, black framed glasses are not included.

7. Beyonce ($25): We were bowing down to Queen Bey way before we saw (and then immediately became obsessed with) Flawless. But now, we’re taking her snarly-faced advice and showing the world just how flawless we are too in this “I Woke Up Like Dis” tee. Especially with a set of matching earrings you bet we feel unstoppable!

8. Daft Punk ($22): We bet Daft Punk are chuckling under those space helmets at the site of this Harder Better Faster Stronger parody tee. Rumor has it they have a great sense of humor.

9. Katy Perry ($22): By now we know that Katy Perry’s costume changes are as varied as her vocal range, and we have to say, this swirling peppermint brassiere of California Girls-era Perry is one of our absolute faves. We can’t wait to see what other sweets she may repurpose as clothing when she takes the stage at the big show this year.

10. Kanye West ($17 and up): If there really is one thing the Bound 2 rapper taught us, it’s to keep our mouths shut regarding all things Yeezy and co. Unless you’re Seth Rogen and James Franco, of course.