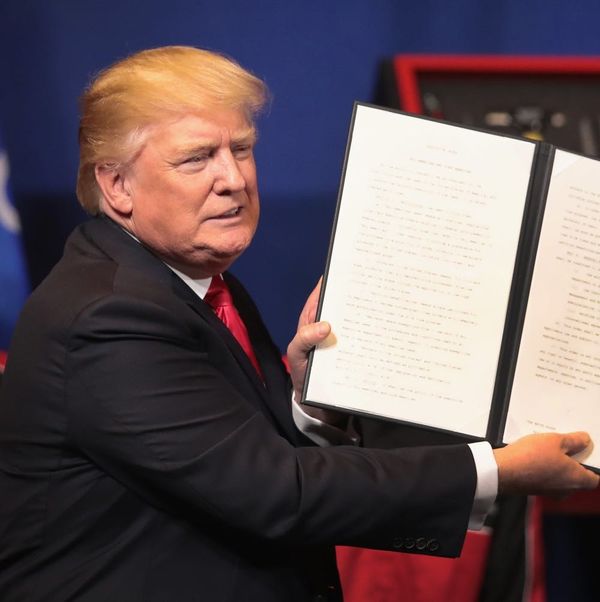 From the get-go, a major priority of the Trump administration’s anti-immigration policy has been the restriction of “chain migration,” the trickle-down immigrant sponsorship process by which many families — including his wife Melania’s — immigrate to the US. To this end, the administration has rolled out one policy after another that specifically targets immigrant families, from separations at the US-Mexico border to threats on birthright citizenship. The administration has also made it nearly impossible for immigrants to become citizens if they’ve used social services like children’s health insurance or SNAP.

All the while, the president and his staff have repeatedly insisted that the country would continue to welcome skilled “legal” immigrants who would be an asset to the economy, even announcing a plan to increase the number of H-1B visas the US would give. Now, the Trump administration is targeting tens of thousands of those same, highly skilled visa holders at the family level by moving to eliminate their spouses’ legal right to work in the United States.

On Wednesday, US Citizenship and Immigration Services (USCIS) reportedly submitted a proposed regulation to the White House Office of Management and Budget that would put an end to a program that gives work permits to the spouses of H-1B visa holders who are waiting to receive green cards — a process that can take years.

H-1B visas are temporary work visas provided to foreign-born workers in “specialty services,” such as a STEM field. The visas are chosen through a random lottery that workers must apply for in advance. Spouses or dependents of H-1B visa holders who are above age 21 have, in the past, been able to apply for H-4 visas so that they can work while their partners wait to receive permanent residency. The rule that permits certain spouses of H-1B visas to qualify for temporary work visas of their own was only put into place in 2015, under the Obama administration.

Ending the program would mean some 90,000 people who are married to temporary work visa holders will lose their ability to work legally in the US. According to Bloomberg, most of the spouses who will be impacted by this policy change are women from India.

“USCIS continues reviewing all employment-based visa programs,” USCIS spokesperson Jessica Collins said in a statement Thursday. “No decision about the regulation concerning the employment eligibility of certain H-4 spouses is final until the rule-making process is complete.”

The Trump administration announced its intentions to alter these programs in the spring of 2017, when the president signed the “Buy American and Hire American” executive order. The order outlines the administration’s general plans to exclude more and more foreign-born workers from the American workforce and to discourage the purchase of certain products made outside the US. Following this order, the US Citizenship and Immigration Services indicated that it would do away with the H-4 program, according to Wired.

Very soon after the Obama administration implemented the H-4 program for the spouses of certain H-1B visa-holders, a group of IT workers calling themselves “Save Jobs USA” filed a lawsuit against the Department of Homeland Security, claiming that the government was illegally taking jobs from US-born citizens. The group was represented by John Miano, an attorney for the Center for Immigration Studies, a far-right anti-immigration group. But now there’s no longer a need for the lawsuit to continue on, as the government will be ending the program itself — a win for the far-right groups who supported the suit.

In a 2018 Wired article about those who stand to lose their ability to work with the end of the H-4 program, one woman, Sampada Khanapurkar, summarized how this change is acting as a deterrent for families like hers. “I mean, I’ve been here so long, I just thought, ‘These people are mine.’ And now people aren’t accepting me. It’s not a good feeling,” Khanapurkar said. “I told my husband yesterday, if this is how we’re feeling and this is how we’re going to be feeling every single day of our lives, living in fear, never know when our visas will be revoked, never know when we’ll be accepted here legally, in spite of being legal, we might as well go to a place where people are accepting of us.”

Deterring Black and brown immigrants from coming to the US, or staying in the US, is exactly what these policies are designed to do. The administration spelled out clearly that the cruel policy of separating children from their parents at the US-Mexico border was intended as a deterrent measure, to scare asylum-seekers and migrants from even attempting to come to the US. The new proposed policy represents yet another example of a measure that creates a hostile environment for individuals who wish to immigrate.