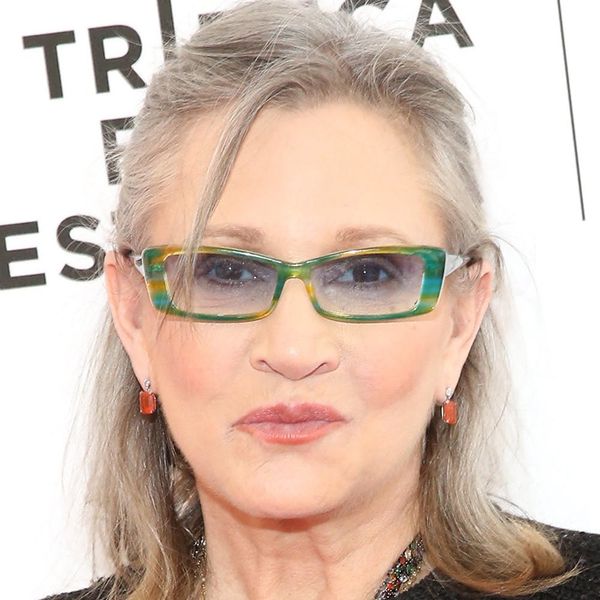 The actress, now 60 (though we don’t recommend judging her based on her age after seeing her sass via Tweet), was en route from London to LA when the incident occurred, with other passengers reportedly helping to administer CPR.

While Carrie certainly has a penchant for rocking our worlds — you might recall the bombshell she most recently dropped about an affair with Harrison Ford — this is a bit more than we can handle.

Don't know how else to process this but Carrie Fisher stopped breathing on the flight home. Hope she's gonna be OK 😞

So many thanks to the United flight crew who jumped into action, and the awesome doctor and nurse passengers who helped

Since then, we’ve learned that Carrie did awaken and get sick prior to exiting the plane, but her condition is still a delicate one. E! most recently reported that she was “out of emergency” and “stabilized” according to her brother, Todd Fisher, but other reports have him clarifying his comments, which are far less cut and dry.

“It’s not fair to say she is ‘stable,’ he reportedly told Reuters. “I am not saying she is fine, or not fine.” He added in a separate interview that while “I’m sure everyone wants to speculate… now is not the time for that.”

Make no mistake, however: Carrie is receiving the best health care she can.

“She is in the intensive care unit; she is being well looked after,” Todd told ET. “If everyone could just pray for her that would be good. The doctors are doing their thing and we don’t want to bug them. We are waiting by patiently.”

We’re hoping for nothing less than a Christmas miracle of an amazing (and speedy!) recovery, and while we may not yet know specifics, we DO know that Carrie is a total badass (read: one VERY tough lady).

In that spirit, we’ll go ahead and echo sister Joely Fisher’s sentiments, who Tweeted, “Use the force, babe.”

Our warmest wishes are with you, Carrie.

What’s your favorite onscreen Carrie moment? Help us honor the actress over @BritandCo.

Nicole Briese
Nicole is the weekend editor for Brit + Co who loves bringing you all the latest buzz. When she's not busy typing away into the wee hours, you can usually find her canoodling with her fur babies, rooting around in a bookstore, or rocking out at a concert of some sort (Guns N' Roses forever!). Check out all her latest musings and past work at nicolebjean.com.
Star Wars
Celebrity News
Star Wars Womens Health