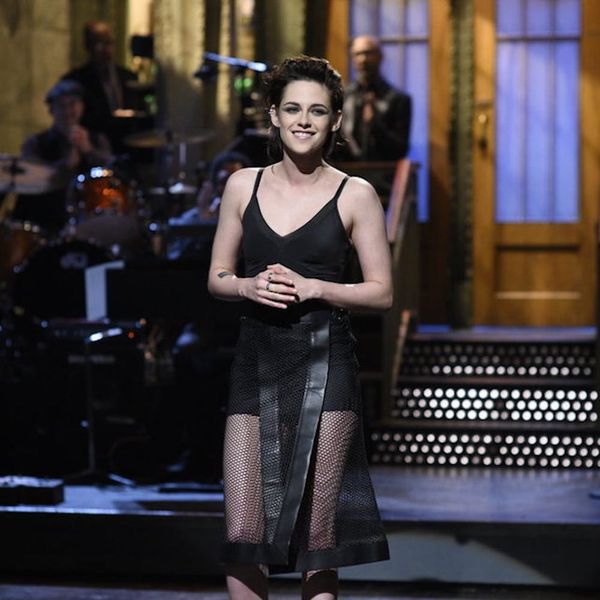 SNL was pretty much straight fire last night — not only did Melissa McCarthy do the dang thing with her impersonation of Press Secretary Sean Spicer and Alec Baldwin return to reprise his role as President Trump, but host Kristen Stewart had a pretty buzz-worthy moment herself.

In her opening monologue, this rebel without a cause took on President Trump (who, as she reminds us tweeted about her not once, not twice, but 11 times), saying, “The President is not a huge fan of of me, but that is SO okay, and Donald, if you didn’t like me then, you’re really not gonna like me now, cause I’m hosting SNL and I’m like, so gay, dude.” She also kindaaaaa sorta accidentally dropped the F bomb on us all — whoopsie!

Kristen Stewart dropping the F-Bomb in her monologue #SNL pic.twitter.com/0izZXRpKDR

While we were LOL-ing right along with everyone else, our attention was also focused on that badass slip dress with leather mesh overlay. How cool did she look!?

Luckily, thanks to celebrity stylist @taraswennen, we know exactly where she got it — and we’re blown away at the budget-friendly designer she chose.

According to Tara, Kristen was rocking Chanel jewels, Christian Louboutin heels and — get this — a Spanx Thinstincts Convertible Slip ($78). WUT!

Though she did jazz it up with a rather pricey YVY Mesh Pencil Skirt (roughly $740 USD), the adjustable (the straps have five-way conversion) and affordable base of this outfit makes for a simple, classic look that anyone can pull off — and it certainly doesn’t hurt that it gives any problem areas you may have “a little hug” to boot.

Would you rock a Spanx dress as an outfit or nah? Tell us over @BritandCo.

Nicole Briese
Nicole is the weekend editor for Brit + Co who loves bringing you all the latest buzz. When she's not busy typing away into the wee hours, you can usually find her canoodling with her fur babies, rooting around in a bookstore, or rocking out at a concert of some sort (Guns N' Roses forever!). Check out all her latest musings and past work at nicolebjean.com.
Budget-Friendly
Celeb Style
Budget-Friendly Celebrity Style lingerie
More From Celeb Style