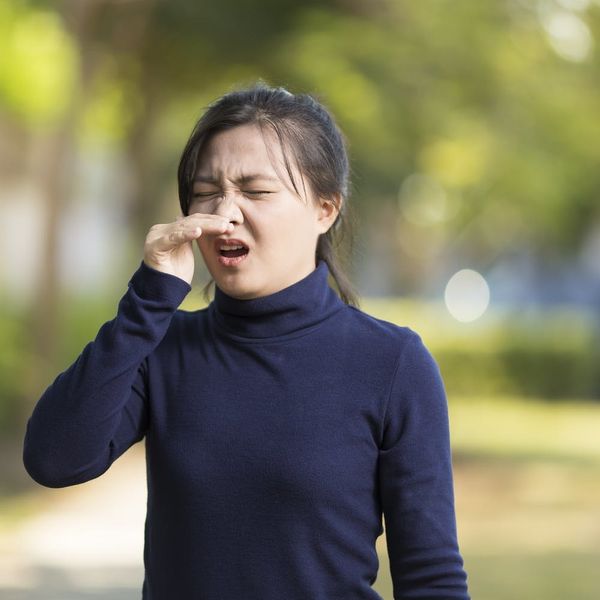 Cold and flu season is here, meaning that it’s just a matter of time before millions of us will be laid up with a sneezy, coughy, disgusting bug (the stats say between five to 20 percent of the population gets the flu each year). Of course, public health services suggest we wash our hands frequently to avoid spreading germs, but how you cough and sneeze can also make a huge difference in either helping contain your sickness or spreading it widely.

Unfortunately for those of us who have to be in public every day, most Americans are coughing and sneezing all wrong  — sneezing into their bare palms or coughing into the tops of their fists — and spreading sickness in their snotty-handed wakes. (Ew.)

Since at least 2006, public health campaigns outside the US have suggested doing something called a “sleeve sneeze” — that is, sneezing or coughing into the crook of your elbow. In Toronto, Canada, the public transit system created an entire awareness campaign to train the public to sneeze into their sleeves starting in 2006. The campaign not only worked, but became somewhat iconic for its posters of a Lichtenstein-esque woman sneezing into the crook of her elbow.

The UK founded a similar campaign around the same time, with The Telegraph reporting in 2007 that nearly 50 percent of cold germs are spread via coughing or sneezing the wrong way. Instead of propelling gross germs into hands and, then, the universe, Prof. John Oxford from St. Mary’s Medical School in London told the magazine’s readers to stop the chain of viral transmission by tossing handkerchiefs and tissues to the wayside and sneezing into their sleeves.

So if there have been several campaigns to get people to stop coughing and sneezing into our hands for more than a decade elsewhere, why are so many Americans still doing things the wrong way? Scientific American suggested we sneeze “Dracula style” in 2014, and, according to the New York Times, the CDC has been suggesting the sleeve sneeze for the last 10 to 15 years.

There’s even some suggestion that the now-infamous dance known as DAB might have its origins in a good old fashioned public health lobby for sleeve sneezing. A metro-Atlanta public transit campaign to Destroy All Bacteria by coughing into your elbow features a photographic demo that looks suspiciously like that dance move we know and love.

Although nothing is perfect, doing an elbow sneeze — or sneezing Dracula style, doing a DAB, or however you’d like to describe it — is, alongside hand-washing, the best line of defense against spreading germs. Please, please, please stop covering your face with your hands, and let your elbow do the work.

Kat Armstrong
Kat has been a writer, social media maven and mom for longer than she's willing to admit. She's also spent time in front of and behind the camera, interviewing celebs, politicians and acting as a producer for fashion and artistic photography shoots. When she isn't writing for various orgs and publications, she's hanging with her kids, husband and French Bulldog, Peter, in Toronto, Canada.
Healthy Living
Womens Health
Healthy Living Womens Health
More From Womens Health