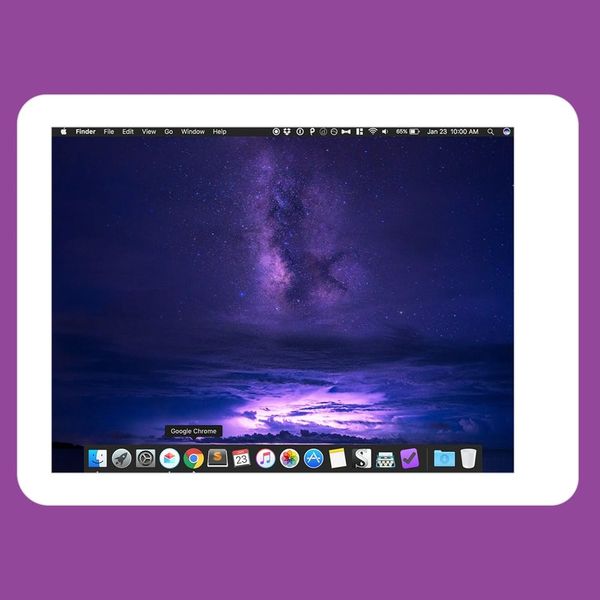 You now know your iPhone can double as a bunch of different gadgets, but we bet you didn’t know your iPad could also be more than just, well, an iPad. If you’ve ever gone through the pain and suffering of wading through a bunch of different tabs — or even programs — on your Mac, you’ll understand the need for a second display. Fortunately, there are options even for those who don’t have a second monitor. All you need is your trusty iPad.

Yup, believe it or not, that’s the Mac desktop layout on an iPad Mini 4. No sorcery involved! Just a handy app from former Apple engineers who recognized that sometimes, one display just isn’t enough. Enter Duet, the app that lets you turn your iPad into a lifesaver. First you’ll need to download the app on your Mac and your iPad (the iOS version is pricey, but trust us — it’s SO worth it).

Next, just connect your iPad to your Mac with a USB-to-lightning cable and launch the Duet app on your iPad and Mac. You should see the little Duet icon (a lowercase “d” within a circle) in your Mac’s menu bar. When you click it, you’ll see your newly connected iPad and a bunch of options, like which resolution to use (regular = battery efficient, retina = seriously good quality but power-draining) and the ability to mirror your Mac’s display rather than use it as an extension. There’s even support for the newest MacBook Pro’s Touch Bar. Once you’re set up, your iPad works pretty much the same as any second display!

Did we mention you can control it all with your mouse/trackpad and keyboard? Yep! If you thought you’d have to fiddle with an onscreen keyboard or use your finger as a pointer like on those old-school touch screens, you were sorely mistaken.

If you favor PC over Mac, there’s an app for you too. Duet’s creators couldn’t very well leave you out, now could they? Get ready to become the ultimate portable-savvy dual display power user.

What would you use a second display for? Tell us @BritandCo!

Shea Lignitz
Shea can be found in the nearest bookstore or brewery, exploring the great outdoors, or blasting Led Zeppelin. She grew up in the cold and rain of Northern California's redwoods but is currently wandering around Texas.
Apps
Tech
Apps MAC Tech News
More From Tech