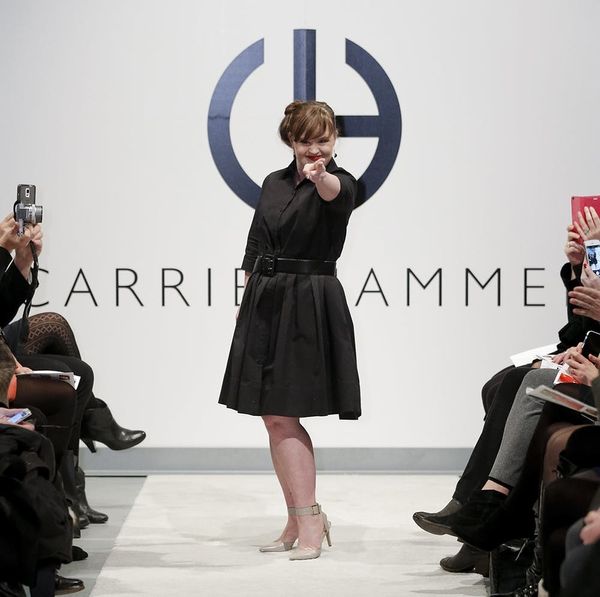 Cara Delevigne and Karlie Kloss are strutting down runways left and right as fashion week (well, more like fashion month) gets fully underway, but the model who’s making the most waves this season is not actually a model at all. Actress Jamie Brewer took to the catwalk last week and made history as the first model with Down syndrome to walk at New York Fashion Week.

Brewer, who is best known for her role in American Horror Story, strutted her stuff at Carrie Hammer’s runway show. The show was part of Hammer’s “Role Models Not Runway Models” campaign, which opted to show off the new designs not on models but rather on the women who she envisions wearing her designs. Alongside Brewer, Kimberly Bryant, the founder of Black Girls Code, Alexandra Amouyel, director of program at the Clinton Global Initiative and Wendy Norman, director of social good programs at Microsoft also acted as models for the day.

While all the catwalk walkers looked amazing, Jamie definitely stole the show. She walked out, rocking an air of confidence that most of us can probably only dream about. She gave the audience a few flirty turns, smiled for pictures and even gave a fun point to the camera. “It’s a true inspiration being a role model for any young women to [encourage them] in being who they are and showing who they are,” Jamie said in an interview with Today.

Aside from a lesson in self-confidence Jamie is a role model for a slew of other reasons. While she already has a role on a hit TV show, Brewer continues to perfect her craft through ongoing education at The Ruskin School of Acting. She has also dabbled in politics. Jamie was the youngest president to ever lead the ARC (an organization for people with intellectual and developmental disabilities) in Fort Bend before she moved onto the State of Texas ARC Board. If she’s able to check all this off the list by age 30, we can’t wait to see what accomplishments the future holds for this inspirational gal.

What’s been your favorite moment from NYFW 2015? Share with us in the comments below.