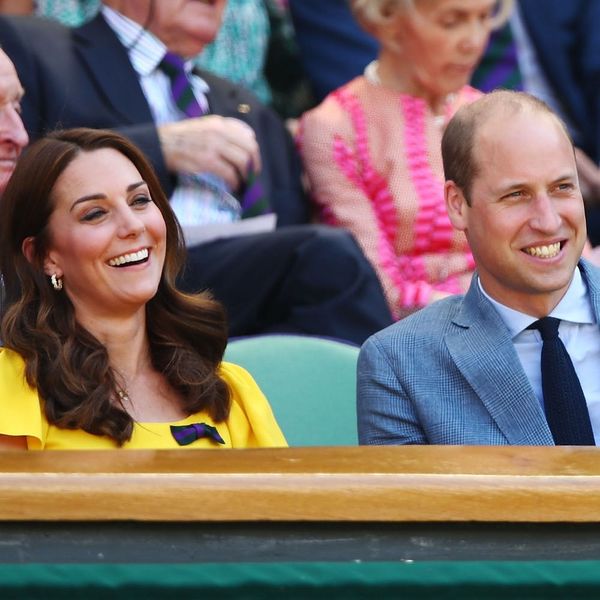 Kate Middleton has been living her best life at this year’s Wimbledon. From enjoying a girls’ day out with Meghan Markle to twinning with her sister, Pippa, the Duchess of Cambridge has really been making the most of the tournament. On Sunday, July 15, she capped it all off with an adorable date with her husband, Prince William.

The pair left their three kids at home to enjoy a day date, which appeared to include plenty of jokes, as the beaming 36-year-old was repeatedly snapped laughing. Arriving at the Gentlemen’s Singles Final to watch Novak Djokovic face off against Kevin Anderson, the mom of three stunned in a bright yellow canary crepe dress from Dolce & Gabbana ($1,065), which is already sold out online (of course!). Her hubby, meanwhile, looked dapper in a white button-down shirt paired with a light blazer and black tie.

The power couple watched the match from the royal box, where they were joined by a slew of famous faces, including British Prime Minister Theresa May, Benedict Cumberbatch, Eddie Redmayne, Emma Watson, Hugh Grant, and Tom Hiddleston.

The duchess is no newbie to Wimbledon, having attended matches as a child. “It is such a quintessential part of English summer,” she gushed at last year’s event. “I was really taken by Agassi and Sampras, Ivanisevic and Steffi Graf. That for me was my first memories.” She actually plays a little tennis herself and has been the patron of the Lawn Tennis Association since 2016.