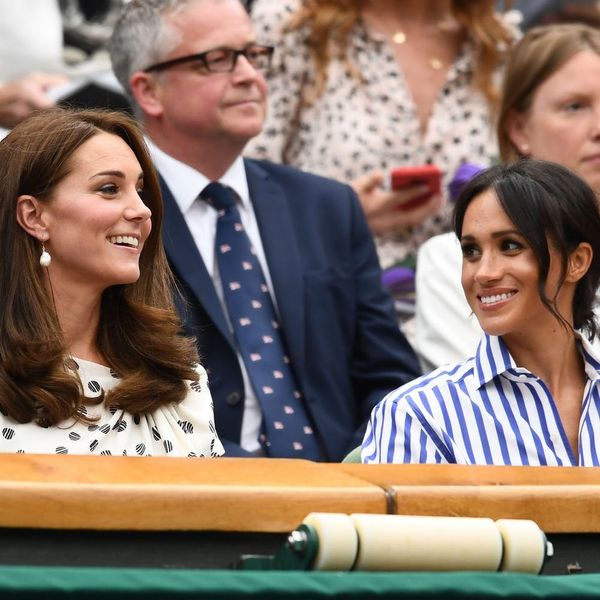 Kate Middleton, Duchess of Cambridge, and Meghan Markle, Duchess of Sussex, did a little sister-in-law bonding during a joint appearance — their first without Prince William and Prince Harry — at Wimbledon on Saturday, July 14.

The ladies attended the Ladies’ Singles final match between Germany’s Angelique Kerber and Serena Williams, one of Markle’s close friends. (She was even on the guest list for the royal wedding!) Duchess Kate wore a black-and-white patterned dress with drop earrings and nude heels, while Duchess Meghan opted for a blue-and-white striped shirt and white wide-leg pants, both by Ralph Lauren.

Prior to the start of play, the royals met with some ball girls and boys, wheelchair competitors, and junior players. Then they took their seats in the royal box, where they were photographed smiling and chatting throughout the afternoon.

After the match, which Kerber won, the duchesses watched Williams give an emotional interview about her loss. “It was such an amazing tournament for me. I was really happy to get this far,” she said, fighting tears. “It’s obviously disappointing, but I can’t be disappointed. I have so much to look forward to. I’m literally just getting started. … To all the moms out there, I was playing for you today.”