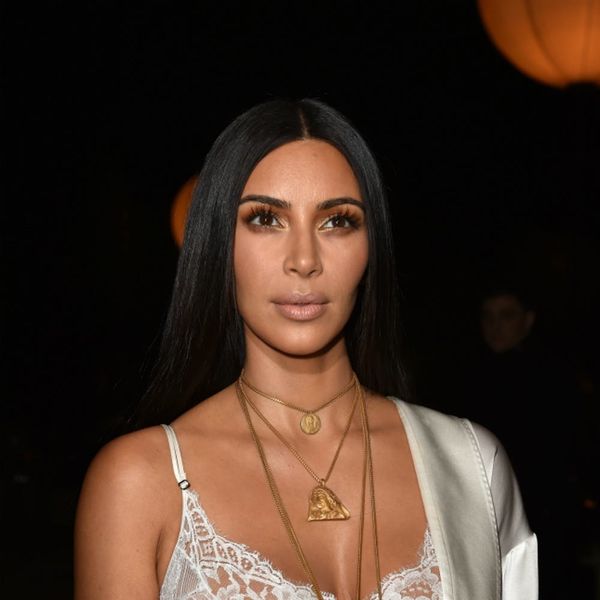 Leave it to Kim Kardashian (West?) to not just return to social media after a three-month hiatus, but to do it in a way that makes us all wonder WTF? While we’ve had small glimpses into the socialite’s life over the last few months, including her adorable Disney Princess snap during Halloween 2016, we haven’t really heard or seen anything big before today, which is why it’s surprising that with the return of the Instagram queen, there was, for a short time, a total name overhaul on both her Twitter and IG accounts.

While the star shared a gorgeous family to her two accounts, simply captioning the photo “family,” she also changed her name from Kim Kardashian-West to simply Kim… and then just as quickly changed it back. Those of us who love Kim know that since marrying Kanye back in 2014, she’s worked very hard at changing her branding to include her newly hyphenated last name, which is why it was so surprising that, even for a short time, she was simply “Kim.”

Within mere minutes, Kim’s name went back to Kim Kardashian-West on both platforms, but we’re wondering what exactly happened here. Since she’d been so adamant to be known as Mrs. Kardashian-West, we can’t foresee a reason why she’d change it, which is why we immediately assumed there was trouble at the West house.

Maybe she was playing with rebranding, since she’s been out of the spotlight and is going for a more simple public persona going forward? We can speculate on this for hours, but one thing’s for sure: We’re actually pretty glad to see Kim coming back, because it means she’s putting her October attack behind her.

Have you changed your name after marriage and did you change it back? Tell us @BritandCo!

Kat Armstrong
Kat has been a writer, social media maven and mom for longer than she's willing to admit. She's also spent time in front of and behind the camera, interviewing celebs, politicians and acting as a producer for fashion and artistic photography shoots. When she isn't writing for various orgs and publications, she's hanging with her kids, husband and French Bulldog, Peter, in Toronto, Canada.
Halloween
Celebrity News
Halloween social media