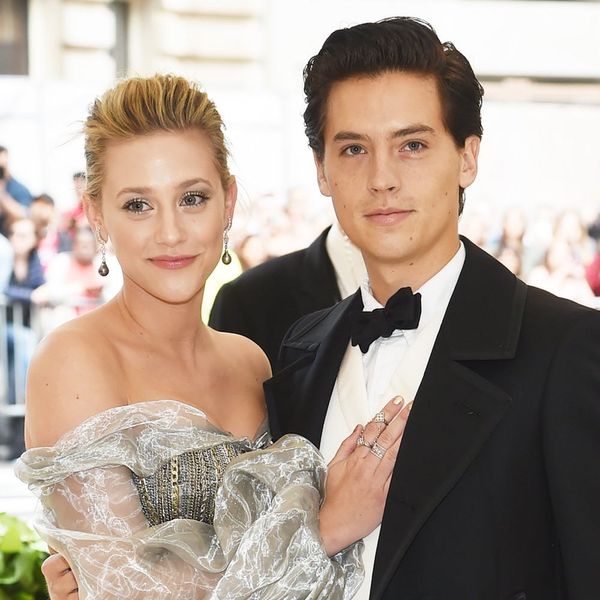 Bughead shippers, rejoice! After months of speculation about their relationship, Lili Reinhart and Cole Sprouse made their red carpet debut on Monday, May 7, at the 2018 Met Gala in New York City — and what a debut it was.

The Riverdale costars, who have dodged questions about their rumored romance for months, weren’t shy about showing affection as they posed for photos outside the Metropolitan Museum of Art. At one point, Reinhart placed her hand over Sprouse’s heart as he wrapped an arm around her waist, pulling her close.

In tribute to the theme of the night, Heavenly Bodies: Fashion and the Catholic Imagination, the actress chose an H&M Conscious Collection dress, pairing the silver lamé organza number with custom Giuseppe Zanotti Design shoes. Celeb hairstylist Bobby Eliot used Leonor Greyl Eclat Naturel Crème to create a textured updo to complement her off-the-shoulder ensemble. “I didn’t want any hair to distract from the silhouette,” he said. Sprouse, for his part, looked dapper in a long black tuxedo jacket and cropped trousers by Thom Browne.

Reinhart and Sprouse have been linked romantically since last summer, but both have vowed never to talk about their relationship in public. “The more you let people in on that, the more people feel entitled to it and the more it becomes problematic with whoever you end up being with in the future, so I take that very seriously,” the Disney Channel alum told People in November. “So I just never talk about it because it’s not anyone’s right to know. People can speculate all they want; people speculate about me with every member of the cast practically, but it’s really no one’s right to know.”

Reinhart shared a similar sentiment in January, telling V Magazine, “People are just dying to know information about if I’m in a relationship or not. I understand the interest, but it’s called a private life for a reason. And it’s not something that I owe the world.”

Sprouse did say, though, that he thinks the public’s interest in their relationship is a credit to their work on Riverdale. “Truthfully, it’s very pleasing that people talk about Lili and I in that way because it means that we’re resonating so strongly from our character perspective that people really want that to be true,” he told Entertainment Weekly. “I think as professional actors we can pat ourselves on the back for that and go, ‘This was a success.’ It was such a success that people want to see it in real life.”

What do you think of Lili Reinhart and Cole Sprouse’s Met Gala debut? Tell us @BritandCo!