Male Entitlement Is Causing Mass Violence, and Women Are Being Blamed 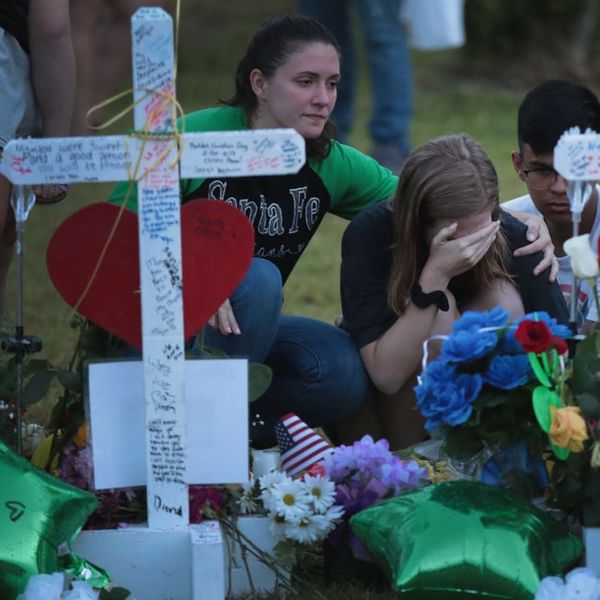 On Friday, tragedy struck yet again in the form of the 22nd school shooting this year. 17-year-old Dimitrios Pagourtzis, the alleged shooter, killed 10 people at Santa Fe High School in Texas with a firearm he stole from his father. One of his possible motives, according to the mother of one of the victims, sounds all too familiar: Pagourtzis had been rejected by one of his female classmates. He had allegedly been “harassing” the victim, Shana Fisher, to be in a relationship with him.

“I know he had pestered her to go out with him,” Fisher’s father told the Daily Mail last week. “She kept telling him no. For one, he supposedly already had a girlfriend. And two, she just didn’t have feelings for the boy.”

Fisher’s mother told CBS affiliate KENS5, “this guy kept harassing her about wanting to be with her, like wanting to be in a relationship.” She told the Associated Press that Shana Fisher “finally stood up to him and embarrassed him.” She seemed to connect the shooting to Shana spurning Pagourtzis’ advances, saying, “a week later, he opens fire on everyone he didn’t like.”

Authorities are still investigating the motives behind the shooting. But one thing is for certain, considering the pattern of violence by men stemming from rejection or being denied access to women’s bodies: Hypermasculinity and male entitlement to female attention are costing women and all people across genders their lives — and judging by responses to these acts of violence, widespread misogyny has yielded a fundamental misunderstanding of who’s to blame for these recurring, almost systemic episodes of mass violence.

One tweet by writer Rebecca Tucker highlights a sharp disparity in cultural understandings of why the Santa Fe shooting happened. Sharing an article entitled, “Texas shooting victim ‘rejected gunman’s advances,'” Turner questioned why Pagourtzis’ alleged pursuit of Fisher had been characterized as “four months of aggressive advances,” instead of “girl murdered after enduring 120 days of harassment’ no.”

Prior to the Santa Fe shooting, in February, 19-year-old Nikolas Cruz shot 17 dead at a high school in Parkland, Fla. In addition to voicing support for racist ideologies, Cruz had also allegedly been abusive toward his ex-girlfriend. He had been expelled by Marjory Stoneman Douglas High School after engaging in a fight with her new boyfriend, and had also been accused of stalking another female student. And yet, in addition to mass, youth-led calls for common-sense gun control as the appropriate solution to the Parkland shooting, others rallied under the motto, “Walk Up, Not Out.”

The “Walk Up” movement essentially blames the Parkland shooting on bullying, due to sympathetic perceptions of Cruz as an “outcast.” The right also notably branded Parkland survivor Emma Gonzales and her peers as bullies, shortly after the teenagers began organizing for gun law reform.

“Walk Up” has drawn criticism for perpetuating racist double standards and ignoring how the efforts of some of Cruz’s peers to befriend him did not prevent the shooting. And yet, it also reflects a greater pattern of victim-blaming toward women and female victims of gun violence.

Violence against women and misogyny can often be predictors of who goes on to commit acts of mass violence. When we tell women they can prevent mass shootings by “being nicer” to men, or by accepting the advances of potentially dangerous men whom they aren’t attracted to, we’re essentially reducing them to human shields for society.

In telling young women to just “be nicer” to men, lest a man they reject go on to lead a mass shooting, we place the pressure to prevent violence not on lawmakers with the power to promote safety through legislation, but on women, who are more likely to be victimized by gun violence. Women and girls have no obligation to engage with men they aren’t interested in; the epidemic of mass shootings isn’t the fault of female cruelty, but a culture in which male entitlement to women’s bodies is so prevalent that far too many men can’t handle being told “no.”

This violence doesn’t just take the form of school shootings, nor is it limited to the US. In April, 25-year-old Alek Minassian killed 10 in Toronto by driving a van through a predominantly female crowd. Prior to the attack, Minassian shared a Facebook post declaring support for the “incel rebellion.” The incel movement — “incel” being short for “involuntary celibate” — calls for punishing women and the men whom women choose to have sex with in retaliation for being denied the sex that incels feel entitled to.

Four years before the Santa Fe shooting, a 22-year-old man named Elliot Rodger killed seven in a shooting spree in which he attempted to target a sorority at the University of California, Santa Barbara. Prior to the shooting spree, Rodger released a Youtube video and manifesto in which he repeatedly stated that his motive for the killing spree was to punish women for sexually rejecting him throughout his life. It’s worth noting that most who knew Rodger have disputed that he ever put in the effort to get to know or have relationships with women: rather, it seemed he felt rejected by women solely because of his feelings of entitlement to sexual favors and relationships with them, without any effort on his end.

Prior to the shooting, Rodger had a record of disturbing treatment of women, as well as men — and in particular, men of color — whom women chose over him. Some who knew him claim he spilled drinks on women who didn’t smile back at him, attempted to attack a group of girls at a party, and once stalked and harassed a couple he saw at a coffee shop. His manifesto proposed locking girls and women up in concentration camps.

Rodger may be an extreme, but there’s no denying a correlation between male entitlement to women’s bodies and gun violence, which targets women but ultimately affects men and women alike. Prior to the Parkland shooting, the perpetrator of the 2017 Las Vegas shooting that killed 49 had a record of domestic abuse toward his wife; so, too, did the man who shot three dead at a Planned Parenthood in Colorado in 2015.

Frankly, there’s no shortage of shooters with records of violence against women, and, in particular, violence against women who reject or deny them sex. Domestic violence victims are five times more likely to be killed if their abusers have access to guns. More than 1,600 women are killed by men, and 760 Americans are killed by ex-spouses or intimate partners with guns, annually. Many of these cases of domestic violence involving guns result in collateral damage that claims the lives of others, not just the women being targeted.

The solution to mass gun violence can’t be that women must perform sexual favors or enter into relationships with any man who asks this of them. Nor is it that women should live in terror of rejecting or offending the wrong man so that we as a society can avoid yet another mass shooting. Legislative action from our representatives is one critical step forward that we as a nation must take. But so, too, is recognition of the violence perpetuated by misogyny.

Male entitlement to women’s bodies far too often lies at the root of mass tragedies. And until we acknowledge the extent to which this entitlement — enabled, of course, by easy access to firearms — is spreading violence and hurting men and women alike, the tragedies will continue.