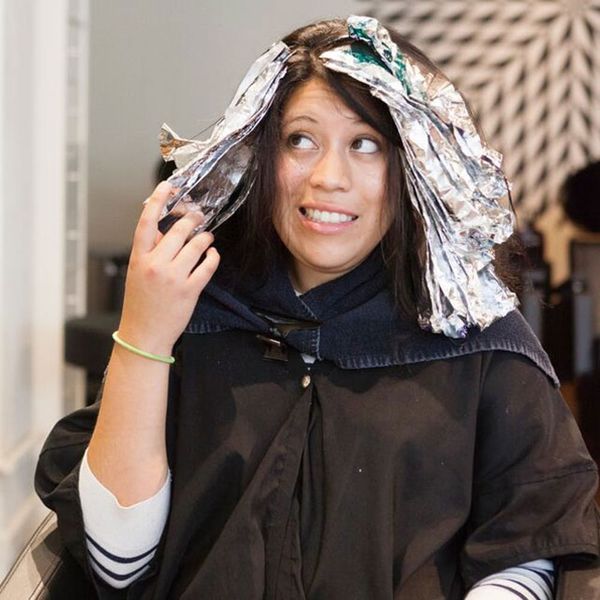 This month, we’ve got hair triumphs and woes on our mind, thanks to November’s B+C Book Club pick, Me, My Hair, and I: 27 Women Untangle an Obsession. The collection of essays explores the importance of hair to women, covering everything from finally conquering your frizz to coming to terms with losing locks after chemotherapy. In our interview with editor Elizabeth Benedict, she told us, “Hair demands our attention, it conveys all kinds of information about who we are, who we want to be and what we want people to think about us. No wonder we can’t stop talking about it!” Inspired by the honest and moving essays of her collection, the ladies of Brit + Co are sharing their most memorable and traumatic hair moments.

1. Victoria Haas, Channel Marketing: “I made my mom cut my hair in middle school because there was this TV actress who I wanted to look like. My mom chopped my hair from mid back to above my shoulders. My thick, curly hair shrunk two inches more. I looked like a poodle. I had to go to a hair salon for them to thin out my hair. My mom also had not cut it straight, so they cut off even more. I then entered my ‘awkward years’ for the next two years until my hair grew back. Curly hair takes FOR-EV-VER. Traumatic. Tears. Bad call, Vic.”

2. Lisa Raphael, Editorial Director: “I went to college in New York City. Due to that and assorted other factors, I was both aware of and concerned about my appearance, and also very broke. I went to one of those McDonald’s-for-your-hair salons to dye my hair once (I think it cost $40) and they ended up having to dye it three times. The first time it was green, the second time purple and by the third time, my hair was bleach blonde and FRIED. I was told not to wash it for as long as possible so it wouldn’t break. I waited an entire week, shampooed, conditioned, dried and thought I was okay — until I spotted an inch-long segment sticking up straight in the back. There was one lonely chunk of hair that just broke off at about the spot where my old roots had ended. For a long time, my friends called it my ‘angry inch.’ <3”

3. Katie Bond, Community Editor: “My craziest hair would have to be the bowl cut my mom gave me in second grade. She was inspired by Demi Moore and thought it would look cute on a youngin’. Looking back on it, I think it built a lot of character.”

4. Mariaclara, Senior Designer: “My mother, who used to be a hairdresser, did not know of or use magical hair taming products such as mousse or gel in my hair until I reached middle school. B.P. (before products), my mom would detangle my hair, leave it natural in the back and have her way with my ‘bangs,’ blowing drying them as she wanted. I would watch as they transformed back into curly cues within minutes. She completed the look with the largest multicolored bows she could find.”

5. Kimberly Wang, News Editor: “You can’t tell it now since I’ve FINALLY embraced my natural hair color, but I’m kind of a hair chameleon. Ever since I hit high school, where I was finally allowed to color my hair, I haven’t seen my real color since I was 14 — that’s 15 years if you care to do the math. My best color was my go-to kind of glossy ash-brown color. My worst is a toss up between when I bleached the underside — just the underside — of my hair, resulting in a lovely skunk-like effect and the time I decided to perm just the bottom half of my super long hair. I spent months — nay, years — suffering the repercussions and growing out both awful mistakes.”

6. Ashley Fischer, Digital Sales Planner: “I’ve made many odd hair choices in my day, so it’s hard to chose just one. When I saw Courtney Love’s bedazzled hair during the 1998 Billboard Awards (above), I knew I had to replicate the look for my middle school snowball dance. I went down to the hair salon and had the stylist twist my hair back in rows into a spiky bun. She then added velcro rhinestones all over to complete my look. #killingit.” (Photo via Brenda Chase/Getty)

7. Anjelika Temple, Head of Creative: “When I was in fifth grade, I wanted to get rid of my bangs. Instead of growing them out like you’re supposed to, my friend and I cut them all the way off, like to my hair line. I had weird little baby bangs forever. It was awful, and my mom wouldn’t let me be friends with that friend anymore.”

8. Brenda Lawerence, Marketing Associate: “Right before my freshman year of high school, I decided I wanted a new look for a new school. My oldest sister convinced me that she could cut my hair exactly how I wanted. At the time, my hair was almost 11 inches long, pretty much half-way down my back. I tore out a few photos of the look I was trying to go for, like a young Hilary Duff with side bangs. She puts my hair into a ponytail to ‘trim the ends,’ and then she promptly cuts all the hair right below the ponytail holder, leaving me with a very harsh bob. I cried for days and I have NEVER cut my hair short ever again. I’m also an insane person now when it comes to getting my hair cut. I have anxiety for days before, always hate whatever cut I get and immediately try growing out as fast as possible. I even wrote about it!”

9. Kelly Bryden, DIY Editor: “It wasn’t until I experienced my first breakup that I decided to experiment with real colors. I walked into a salon in Brooklyn, NY and said, ‘My boyfriend just broke up with me. I need new hair!’ We decided to do purple highlights on the underside of my hair, so I could show them off or hide them. From that day on, I’ve had some type of purple hair. I went from highlights to full underneath purple, to purple, teal and pink highlights all over and finally, a full purple head! My goal in life is to have my future children pick up the purple crayon when drawing me in their kindergarten classroom.”

10. Casey Richards, Assistant Buyer and Operations: “I was in South Korea on spring break, with like 10 friends, one bathroom and a no hair-dryer hostel. I had long, thick hair and ended up walking into a salon and getting a super short cut, purely for survival and efficiency’s sake. It was a total leap of faith, since I don’t speak Korean, but it actually came out pretty good.”

11. Caitlin Silva, Customer Service Specialist: “When I was in my late teens, I didn’t want to pay to get my hair trimmed, but desperately needed it. One of my friends told me she trimmed her hair all the time herself, so I trusted her with the job. What she didn’t realize was my hair was very curly and when it dried after ‘trimming,’ a couple inches off my hair was WAY shorter than expected. I showed up to our annual family photo shoot and my mom was not happy, as she had envisioned a photo of me on her horse with my long, black hair flowing into his black mane. After that, I refused to let anyone touch my hair for five years, and only recently, after a lot of tears, I let a hair stylist trim a quarter of an inch off. #babysteps.”

12. Kate Puhala, Senior Style Editor: “I’m the type of person who grows her hair super long then cuts it really short (I get bored with my hair easily). I went super duper short with a tight all-around crop and straight across baby bangs — it was so different, I loved it. At the time, I was working as a barista at a time travel-themed cafe (The Wormhole in Chicago), and day one with my new ‘do, noticed that a lot of the dudes who frequented the cafe were *staring* at me. Why they were staring went over my head until the owner looped me in: I apparently got *the* Vulcan haircut from Star Trek, a style which our nerdy clientele had the uber hots for. From then on, I Vulcan saluted every dude who did a double take as I rang them up for their Honey Bear Latte for the rest of the week.”

13. Angela Velez, Community Editor: “When I eight years old, I desperately wanted a full head of tiny braids with beads on the end, just like my cool older neighbors. My parents had no interest in braiding my hair or buying me tiny rubber bands, so I had to be crafty. I read in my American Girl Magazine that you could use tinfoil to secure the beads, so I spent hours trying to wrap tin foil around poorly braided hair, and then slip beads on. It was a total hair fail, and my mom was mad that I used up all the tin foil.”

14. Erica Rios, Product Manager: “In college, I was broke and went to a hair salon that offered a $20 haircut. I asked for a lot of layers, and I came out with a lopsided Tina Turner-esque cut. When I got home, I realized that if you pulled up my hair, half of it was inches longer than the other half, at all of the different layers. I went back to the hairstylist crying after I realize what had happened, and I was angry. She offered to fix it, but I was like, ‘I want my 20 dollars.’ Needless to say, I never got a $20 haircut ever again.”

What’s your craziest hair story? Are you reading along with the B + C Book Club? Tweet or Instagram your pics and thoughts using the hashtag #BritCoBookClub.