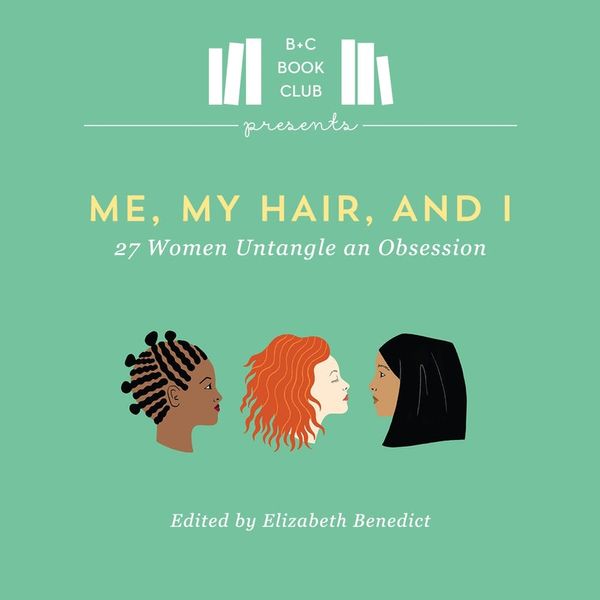 With Halloween safely behind us and nothing but cozy nights before us, we’re ready to conquer our TBR list once and for all. In between all those Friendsgiving parties and mulled wine making, we’re spending the next month diving into the newest B+C Book Club pick: Me, My Hair and I : 27 Women Untangle an Obsession ($17), by Elizabeth Benedict.

From mother-daughter squabbles over length to dramatic post-breakup chops, the writers in this book bare it all as they get to the root (pun intended!) of why hair is so important to women. To kick off November’s B + C Book Club, we chatted with author and editor Elizabeth Benedict about her anthology, favorite career advice and why she’s in awe of her stepdaughter.

In Me, My Hair, and I, Elizabeth expertly brings together a diverse group of women to deliver a powerful and poignant collection of essays. Before tackling hair, Elizabeth edited the best-selling anthologies, What My Mother Gave Me: Thirty-one Women on the Gifts That Mattered Most and Mentors, Muses & Monsters: 30 Writers on the People Who Changed Their Lives. She’s also a best-selling author, journalist, creative writing teacher and writing coach. Today, she’s sharing her writing advice, book suggestions and more with us.

BC: What is the best piece of career advice you’ve ever received?

BC: What advice do you have for young women who dream of becoming writers?

3. Engage in other interesting pursuits so you will have fresh subject matter. Writing is not a talent that needs to be used when you’re a child or teenager to bear fruit. It’s not like being a ballerina or a violinist, where you have to have started as a child. You can do it at any age, so find out what’s going on in the world so your writing will be rich, complicated and full of wisdom. Be bold and adventurous in your life, avoid getting an MFA as long as possible, and read the kind of books you want to write — and many more.

BC: How do you power through creativity blocks? Do you have any tips or tricks for our readers?

EB: When I don’t know what to do next, I pick up a book or two or three and see how other writers solve the kinds of problems I’m trying to solve. How to start a story. How to start a new chapter. How to find a voice with a certain kind of energy. Sometimes I reread a favorite book. Sometimes it’s also inspiring to look at other art forms — paintings, films, architecture.

BC: Tell us about a maker (any creative person) you admire.

EB: My violinist stepdaughter, Emily Daggett Smith. When she was six years old, she heard two women play the violin at her school and fell in love with the sound. She told her mother that playing the violin is what she wanted to do. And she did. Now she’s 28 and plays professionally and beautifully. It has been an immense privilege to see her develop as a musician and a woman and to move into the life she’s chosen.

BC: Tell us about three under-rated books that our readers should know about.

EB: Speaking of Grace Paley, I’d recommend just about anything she’s written. Perhaps start with the short stories in Enormous Changes at the Last Minute. I don’t think it’s under-rated, but it might not be much read by younger women these days. Property by Valerie Martin is a very different undertaking — a short, searing novel about the unhappy wife of a Louisiana plantation owner in 1828 that makes us think about power and oppression in marriage. Coral Glynn is a haunting novel by Peter Cameron about a poor young woman who becomes a private nurse to a dying woman and then gets into a complicated relationship with her son.

BC: What made you choose hair as the central theme for a collection of essays?

EB: Two years ago, I published an anthology that got women talking — lots of public and private conversations. I asked 30 women to write about a favorite gift from their mothers, and to use the gift as a way to talk about the relationship they had with their mothers. The collection — What My Mother Gave Me — spoke to a lot of women, and they kept saying to me, “We have to keep having these conversations.” I think they meant deep conversations about subjects that were very personal, but not confessional in the usual way.

I pitched ideas to my publisher about what to do next — and one day they pitched one back at me: hair. They didn’t need to say more. I had thought of doing an anthology eight years ago on women and their hair, but I couldn’t get enough writers at the time. With the publisher’s interest, it came together pretty quickly. You won’t be surprised to hear this, but women LOVE to talk and write about their hair! And when you ask a woman about her hair, you just might get the story of her life. And those life stories lead everywhere, to religion, race, families, sibling rivalry, sexuality and mortality.

BC: What was the writer search process like? Were there themes that you knew you wanted the collection to address? Are there any themes that you wish the book had included?

EB: The first criterion was that the contributor be an accomplished essayist. The publisher and I put together various wish lists, a mix of writers from different ethnic, racial and religious backgrounds, people who’d lost hair to cancer, people who gave up dyeing their hair and went gray and then a few writers whose photographs made it clear that having good hair was important to them. I tried very hard to find a Washington writer to talk about women’s hair as a political prop — the Hillary Syndrome — but unfortunately that didn’t work out.

BC: Was there any one story or that surprised you the most? Or any one theme?

EB: Deborah Tannen wrote about why mothers and daughter “tangle” over hair, and those mother-daughter tangles showed up in a good many essays. Mothers often have a great deal to say about their daughters’ hair, and it’s often taken critically, even when the mothers don’t think they’re being critical. A lot of family power struggles take place on the top of our heads!

I’ve come to understand that hair hovers between the public and the private spheres. We feel more free to criticize a friend’s or loved one’s hair than their clothes or their boyfriend. I have a friend who is extremely polite. We sat down one night at a restaurant and the first thing she said to me was, “You’re hair’s too dark.” But she would never have said, “You’ve gained weight” or, “Your husband is a jerk.”

Hair is such a complicated body part! It grows, it falls out, it changes color and texture and it can be changed so radically. You can try on a new identity on your way home from the gym. Hair demands our attention, it conveys all kinds of information about who we are, who we want to be and what we want people to think about us. No wonder we can’t stop talking about it!

Ready to join the B + C Book Club? Snag your copy and tweet or Instagram your book using the hashtag #BritCoBookClub. Let us know in the comments what you think!