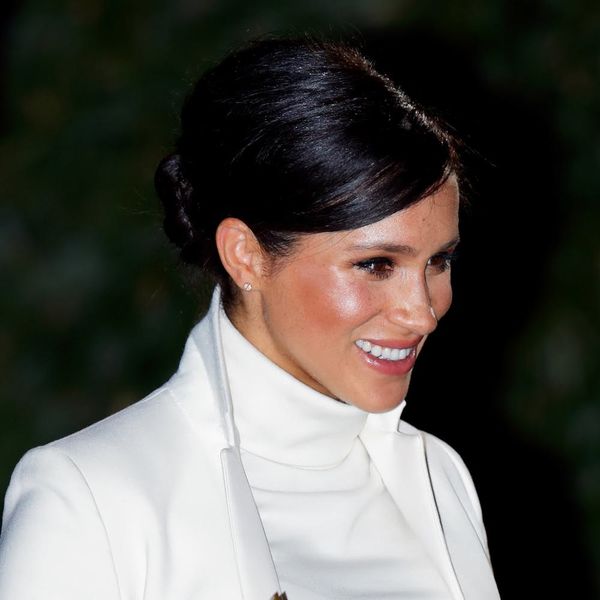 The Duchess of Sussex has done it again — only this time with a touch of retro flair. On Tuesday, February 12, 2019, Meghan Markle and Prince Harry had a date night to attend the gala performance of The Wider Earth at the Natural History Museum in London.

In place of her signature messy bun, the mom-to-be wore her hair in a ’60s-inspired chignon featuring a deep side part. With added height at the crown and a soft swooping part in front, Markle showed us once again that she’s never afraid to experiment with her tresses. (Photo via Max Mumby/Indigo/ Getty)

The duchess has been experimenting with her hairstyles as of late. Just last week she rocked a high-shine, middle-parted low bun for The Endeavour Fund Awards in London. Back in January 2019, she stepped out in a classic top knot for a visit to the Association of Commonwealth Universities in London. And let us not forget the time she turned heads with her flirty floral French twist on a stop in Fiji during the royal tour in October 2018. (Photo via Karwai Tang / Getty)

This is the second philanthropic performance the royal couple has attended in 2019, the first being Cirque du Soleil’s Totem in January, benefiting Prince Harry’s charity Sentebale — an organization that focuses on the health and wellbeing of HIV positive children and adolescents in Lesotho and Botswana. According to a tweet sent out by the Kensington Palace Twitter account, The Wider Earth charity performance supports the Queen’s Commonwealth Trust and the production’s official charitable partner, the Queen’s Commonwealth Canopy, which focuses on forest conservation. (Photo via Mark Cuthbert/ Getty)

Do you like Meghan Markle’s latest hairstyle choice?Tell us @BritandCo!

Rebecca Norris
Rebecca Norris is the Beauty Editor at Brit + Co. With a New York apartment that looks more like a Sephora than a home, she's just as quick to roll up her sleeves to swatch all the best bold lipsticks, as she is to hop in a dermatologist's chair to review a vampire facial. After all, anything in the name of a good story, right?
Celebrity Beauty
Beauty News
Celebrity Beauty Celebrity Hair Meghan Markle Style
More From Beauty News