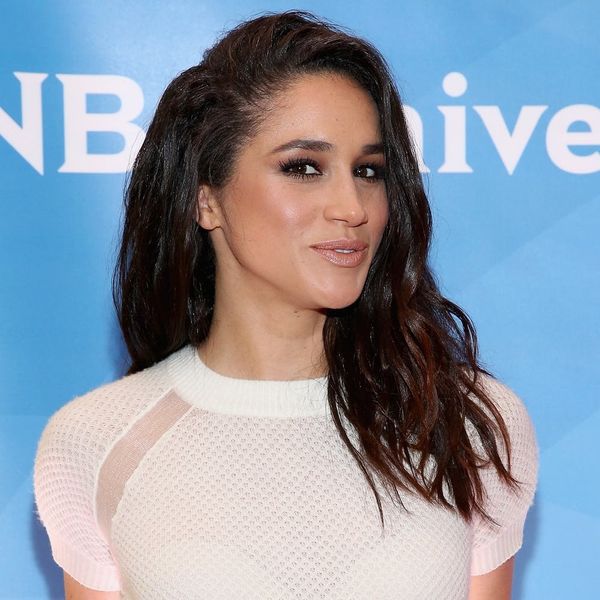 Ever since Suits actress Meghan Markle started dating Prince Harry, her every move and every outfit has been in the spotlight — but the silver lining around all the scrutiny is that the 35-year-old has decided to use her platform to further causes she cares about. The actress was photographed at her first public appearance with her new beau at a polo match in Ascot, England looking every inch a royal in the making — plus, sporting a very special accessory.

She cheered on her boyfriend, who participated in the match, from the royal box in a navy Antonio Berardi double breasted sleeveless dress ($2,695, sold out) and a white Babaton Keith overcoat ($195), but it was a much smaller detail of her outfit that has us cheering on her altruism.

Those that were close enough to spot the rumored future Royal were quick to notice the Share Joy bracelet ($37) dangling from her wrist. Yet not only did the charm scream minimalist chic, but it also boasts a deeper meaning.

Designed by Canadian designer Ayca in collaboration with eBay Canada and The Shoebox Project, the bracelet is available for purchase (*cough, cough, Mother’s Day reminder here) with all proceeds not only going to support the project, but linking you to a woman in need as well.

For every bracelet that you buy, a matching bracelet will go in a shoebox filled with items for a woman living in a shelter, which include warm accessories for winter, toiletries, Kleenex, inspirational messages, and the like. It’s a small way to help until you can get around to packing your own shoebox with the guidelines seen here.

Brava to Markle for not only helping, but choosing to use her time in the public eye to inspire us all to do the same.

How are you giving back in your community? Tell us over @BritandCo.

Nicole Briese
Nicole is the weekend editor for Brit + Co who loves bringing you all the latest buzz. When she's not busy typing away into the wee hours, you can usually find her canoodling with her fur babies, rooting around in a bookstore, or rocking out at a concert of some sort (Guns N' Roses forever!). Check out all her latest musings and past work at nicolebjean.com.
Celebrity Style
Celeb Style
Celebrity Style Charity Royal Family
More From Celeb Style