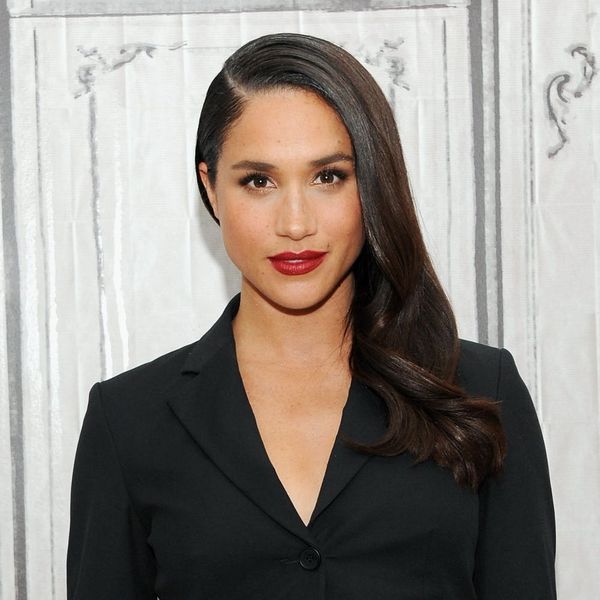 Friends of Prince Harry and Meghan Markle may be expecting news of an engagement any day now, which seems to be backed up by gestures like Meghan’s public declaration of love, the first photographic evidence of PDA between the two and the fact that Meghan has been introduced to the royal family, including Kate and little Princess Charlotte. But now, a new ring on Meghan’s finger has sparked serious engagement buzz.

When the Suits star stepped out with new bling on her finger, folks were quick to spot what might be a sign of a royal engagement. A gold piece which some thought might be in the shape of an “H” (for Harry, natch), the sighting had headlines popping up questioning whether or not Harry had popped the question.

Well, we have an answer for you: Though we don’t know whether or not Harry has indeed proposed, we do know that the new item Meghan is slaying is NOT an engagement ring.

A double arrow ring from London-based retailer Missoma, it’s a favorite brand of Meghan’s. In fact, if you’d like to nab a ring like the (possible) future princess (or duchess, perhaps, just like Kate?), you can pick up the 18-carat gold ring in the area of a relatively reasonable $75.

That’s probably much cheaper (and WAY edgier) than any ring Harry would propose with. That is, if Kate’s ring is any indication.

Do you think we’ll be seeing an engagement ring on Meghan Markle soon? Tweet us @BritandCo!

Desiree O
Desirée O is a ‘Professional Bohemian’ who loves anything and everything related to the arts, entertainment, and pop culture. She ADORES being a ‘Newsy’ for Brit + Co, covering all of the latest tidbits of awesomeness that you want to read about. When she’s not writing, she’s either making messy art, going on long adventurous walks with her camera, or poking around over at bohemianizm (http://www.bohemianizm.com/). You can find out about Desirée O and her work at http://DesireeO.com/ or follow her on Twitter @DesireeO.
Engagement Rings
Celebrity News
Engagement Rings Royal Family
More From Celebrity News