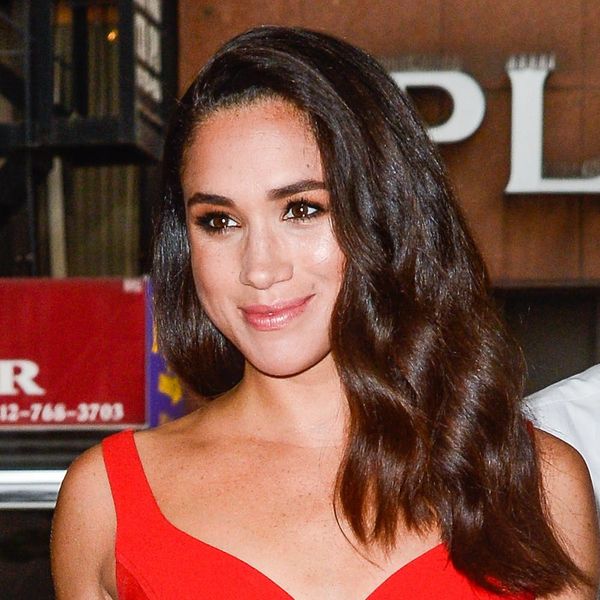 We may have only learned of the relationship between Prince Harry and Meghan Markle a few weeks ago (which sparked a firestorm of reactions and prompted Harry himself, as well as big bro, Prince William, to respond), but it looks like things are rolling right along for the young royal and his lovely lady. That is, if her jewelry is any indication. No, she’s not yet flashing an engagement ring, but her necklace is certainly saying a lot.

This past week, the 35-year-old Suits star (who’s under newly intense paparazzi scrutiny) was spotted strolling around Toronto carrying bouquets of flowers and wearing an outfit that we could totally see on Duchess Kate.

Meghan Markle is in love, she's in love and she's got an "H" necklace to show it: https://t.co/sJ0IoDn5Vh pic.twitter.com/yOuuQqEgnJ

However, it’s her necklace that we’re now fixated on. It’s a simple gold chain, and at first glance it’s nice, but nothing special. Now take a closer look. Yep, that’s a tiny M for Meghan and a tiny H for Harry. O… M… G.

It’s a teeny, yet totally public declaration of her feelings toward Harry, and we have to wonder if this is an item she picked up for herself or a gift from her Prince Charming, who’s also been spotted in Toronto visiting his lady before the holidays. Early Christmas present perhaps? Either way, it definitely looks like these two are feeling the love.

What do you think about Meghan’s necklace? Tweet us @BritandCo!