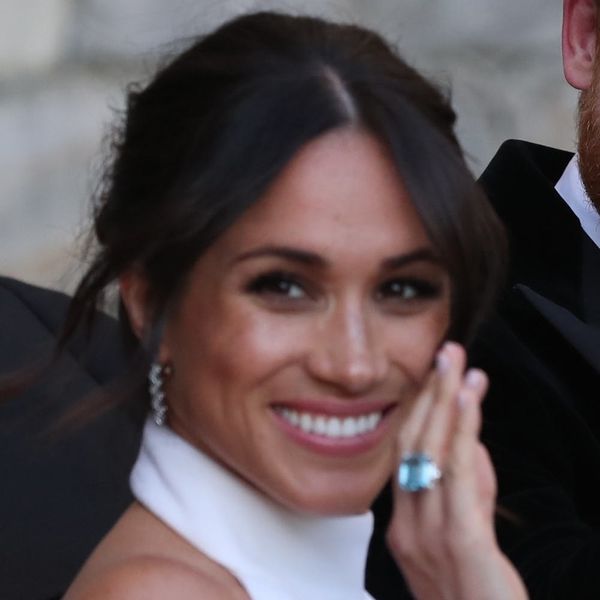 Princess Diana’s memory was alive and well at yesterday’s royal wedding ceremony — and at the royal reception. Meghan Markle headed off to her evening celebration at Frogmore house with a brand new piece of jewelry that its maker has now confirmed once belonged to her late mother-in-law.

According to The Telegraph, in addition to the blue soles of her Aquazurra heels, the new bride was gifted with a blue accessory for her wedding by her husband in the form of an Asprey emerald-cut aquamarine ring with small solitaire diamonds and set in 24K gold.

Princess Diana wore the ring at a private viewing of a Christie’s auction of her own dresses back in 1997.

She also wore it with its matching five-strand pearl bracelet while attending a Gala dinner in Sydney Australia.

The ring was one of several ways Prince Harry’s mother was honored at the couple’s wedding: The bride also included forget-me-nots, Princess Diana’s favorite flower, in her bouquet (which was hand-picked by Prince Harry). The lunchtime reception also featured entertainment or Sir Elton John, one of the late royal’s most famous friends.

What do you think of Meghan’s bling? Share over @BritandCo.

Nicole Briese
Nicole is the weekend editor for Brit + Co who loves bringing you all the latest buzz. When she's not busy typing away into the wee hours, you can usually find her canoodling with her fur babies, rooting around in a bookstore, or rocking out at a concert of some sort (Guns N' Roses forever!). Check out all her latest musings and past work at nicolebjean.com.
Jewelry
Wedding Style
Jewelry Royal Family Royal Wedding
More From Wedding Style