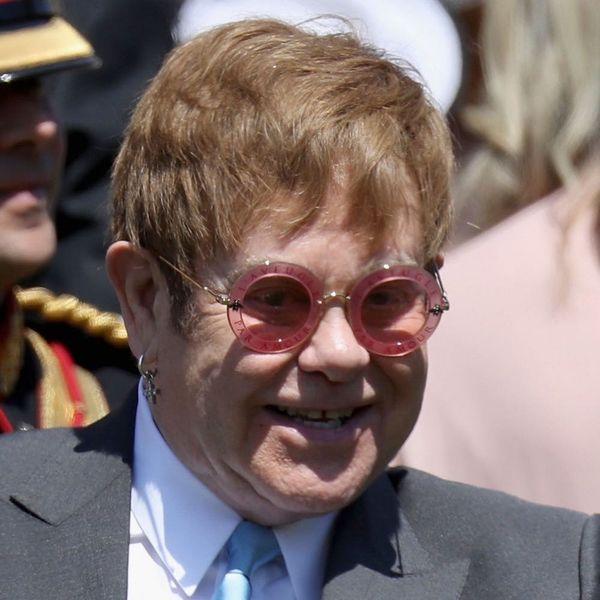 The royal wedding may be over, but the celebration has just begun! Queen Elizabeth II has kicked the festivities off with a lunchtime reception for her grandson, her new grandaugher-in-law, and 600 guests besides — including Sir Elton John.

As a statement via the palace confirms, rather than simply partaking in the royal feast of canapés and Pol Roger Brut Reservé Non-Vintage Champagne, however, Princess Diana’s former comrade took to the piano to perform for the crowd at the request of Prince Harry himself.

“Sir Elton performed for the newly married couple in recognition of the close connection he has with Prince Harry and his family,” it read.

There’s no word on whether or not the musical icon performed the updated version of the 1973 hit he sang at Princess Diana’s funeral, “Candle in the Wind (Goodbye England’s Rose,” but the Daily Mail reports that he did belt other favorites, including “Your Song,” “Tiny Dancer,” “Circle of Life,” and “I’m Still Standing.”

Sir Elton John and Princess Diana met back in 1981 at Prince Andrew’s 21st birthday party at Windsor Castle. 16 years later, she was there to comfort her friend at the funeral of fashion legend Gianni Versace.

In addition to John’s performance, guests were also treated to speeches from Prince Charles, Prince William, and Prince Harry.

What’s your favorite Elton John song? Share with us over @BritandCo.

Nicole Briese
Nicole is the weekend editor for Brit + Co who loves bringing you all the latest buzz. When she's not busy typing away into the wee hours, you can usually find her canoodling with her fur babies, rooting around in a bookstore, or rocking out at a concert of some sort (Guns N' Roses forever!). Check out all her latest musings and past work at nicolebjean.com.
Celebrities
Celebrity News
Celebrities Music Royal Family Royal Wedding Weddings
More From Celebrity News