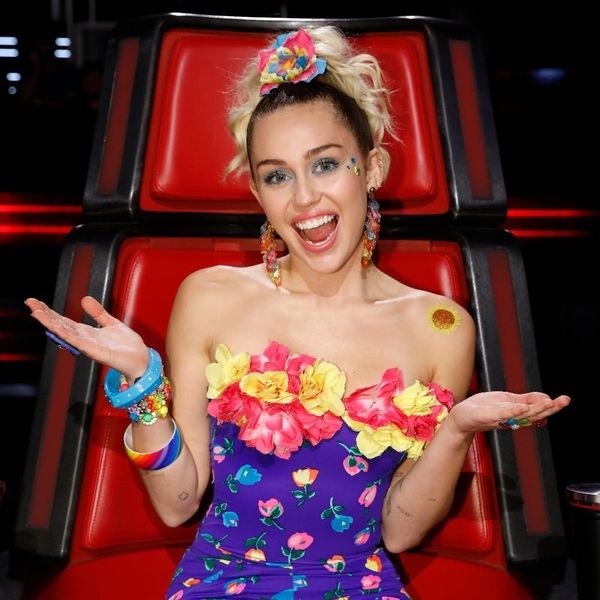 Miley Cyrus and Liam Hemsworth might be getting married any day now — or they might end up waiting until President Trump is out of office — but whenever the big day rolls around, we can’t help but wonder what the singer will look like as a bride. And now our imagination has more to work with, as an insider has just revealed the deets around Miley Cyrus’ wedding dress.

While we would never dare to assume that the Voice star would wear anything normal or expected for her nuptials, the fact that Cyrus is willing to slip on pretty much anything and everything that strikes her color-loving’ fancy makes it pretty much impossible to predict what sort of dress she might opt for (that is, if she wears a dress at all).

However, it seems like Miley Cyrus’s connection to her spiritual side might be influencing her current choice. After recently posting a pic that hinted at a deeper side of Cyrus, a source close to the singer has revealed to Life & Style that “[Miley] wants to focus on the spiritual side of marriage and is very interested in Hinduism.”

Because of that, and despite reports that the pair would wed in Australia, the insider added that when it comes to where the ceremony will take place, the star “is looking at locations in Nepal, where Hinduism is a way of life. Miley has a real hippie side and wants to embrace that rather than spending millions.”

While we’re totally for Miley eschewing traditional wedding looks to do whatever she wants, she may want to be careful when it comes to appropriating other cultures on her special day, or she may find herself apologizing — something her soon-to-be in-law knows something about.

What do you think about Miley Cyrus possibly wearing a traditional Hindu wedding dress? Let us know @BritandCo!

Desiree O
Desirée O is a ‘Professional Bohemian’ who loves anything and everything related to the arts, entertainment, and pop culture. She ADORES being a ‘Newsy’ for Brit + Co, covering all of the latest tidbits of awesomeness that you want to read about. When she’s not writing, she’s either making messy art, going on long adventurous walks with her camera, or poking around over at bohemianizm (http://www.bohemianizm.com/). You can find out about Desirée O and her work at http://DesireeO.com/ or follow her on Twitter @DesireeO.
Celebrity Wedding
Celebrity News
Celebrity Wedding Miley Cyrus
More From Celebrity News