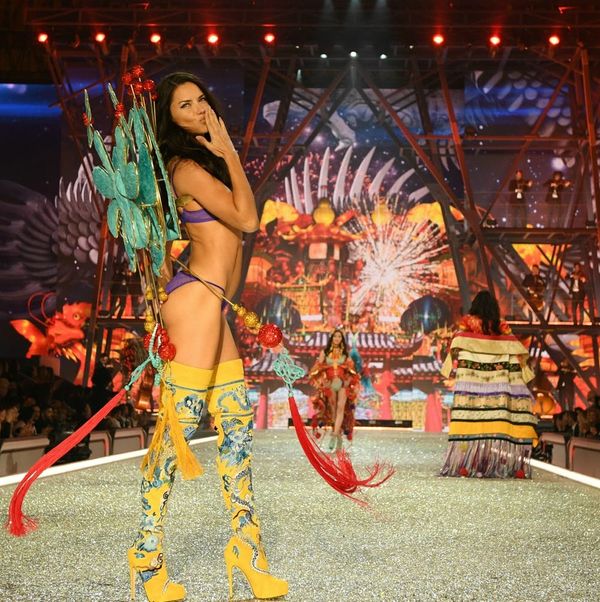 The 2016 Victoria’s Secret Fashion show hasn’t even aired yet, and already, it’s all we can do to keep up with the drams! Even prior to the show, controversy was abrew, with Jasmine Tookes taking to Instagram to speak out against haters that claimed she bleached her skin.

But the latest grievances against the retail giant are a bit more serious in nature.

Following a 2012 sh*tstorm over cultural appropriation that ensued when model Karlie Kloss donned a Native American headdress on the runway (pulled prior to airing), Helen Jung, a writer for Cosmopolitan, unleashed a series of now-deleted accusations in an essay on the site against the company over some of this year’s outfits.

With many of the looks featuring both Asian (specifically Chinese) and Mexican elements, Helen went so far as to call the lingerie racist.

Obtained by E! prior to deletion, Helen’s essay also pegs what she calls the company’s nod to worldliness a “hack job.”

“The dragon that Elsa Hosk wore wrapped around her body, the embroidered stiletto boots seen on Adriana Lima, the tail made of flames worn by Kendall Jenner…the Orientalism on display here doesn’t show an understanding or an attempt at dialogue. It doesn’t close any gaps,” she wrote. “The brand and its creative shamelessly cherry-picked imagery, breaking apart aesthetic references from wherever they wanted and stitching them back together again.”

Yikes! Though E! reached out to VS for comment, there’s no updates as of yet, or word as to whether or not some of this year’s looks will also be pulled prior to airing.

Do you think VS should pull the looks? Share with us @BritandCo!

Nicole Briese
Nicole is the weekend editor for Brit + Co who loves bringing you all the latest buzz. When she's not busy typing away into the wee hours, you can usually find her canoodling with her fur babies, rooting around in a bookstore, or rocking out at a concert of some sort (Guns N' Roses forever!). Check out all her latest musings and past work at nicolebjean.com.
Controversy
Style News
Controversy lingerie Victoria's Secret
More From Style News