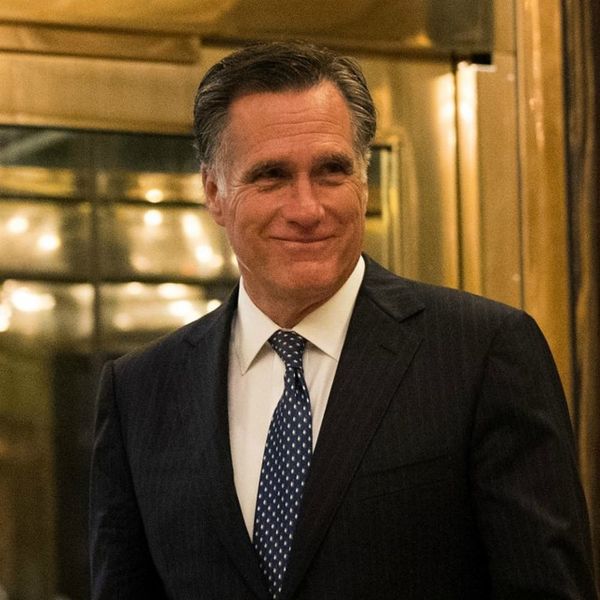 Mitt Romney is throwing his hat in the ring in this year’s midterm elections, announcing via Twitter today that he would be running for Senate in Utah — and revealing the sexist double-standards we have about political candidates.

“I am running for United States Senate to serve the people of Utah and bring Utah’s values to Washington,” Romney tweeted Friday morning. In the accompanying video, he shares a brief story of how he helped turn the 2002 Salt Lake City winter games around thanks to Utahan volunteers, and says that the state has a lot to teach Washington. Utah, Romney explains, has a balanced budget, a manufacturing sector that exports more than it imports, and the way the state treats immigrants is humanizing and respectful, digging at the federal GOP and its decision to repeal DACA.

Many have pointed out that Romney’s re-entering the political arena hasn’t been met with the same lack of respect some felt was given to Hillary Clinton in previous years.

Mitt Romney is the same age as Hillary Clinton.

He was not a Secretary of State.

He was not a United States Senator.

But I don't see people telling him to go away or take up knitting.

Need a good explanation of the double standard between how media covers Mitt Romney versus Hillary Clinton? THREAD. https://t.co/TCsfpdzlCR

“If you give me the opportunity,” Romney pledges, “I will owe this Senate seat to no one but the people of Utah. No donor, no corporation will own my vote or bias my campaign. And let there be no doubt — I will fight for Utah.”

While Romney’s about-face seems like it could be a boon for the state of Utah, political pundits are pointing out that the former Governor’s track record might be something to keep in mind.

Friendly reminder that Mitt Romney wanted all undocumented immigrants to self-deport. He also chose Paul Ryan as his running mate and actively sought Trump's endorsement in 2012 and flew to Vegas to receive it.

mitt romney rolled out an endorsement from trump in 2012
he spoke out against trump in 2016
then after the election he sucked up to trump hoping to be secretary of state
mitt romney is an unprincipled, power-hungry politician pic.twitter.com/7zwX2wWT2J

Hey, now that Mitt Romney has announced he's running for Senate, it's a perfect time to remember that MITT ROMNEY THINKS PEOPLE ARE NOT ENTITLED TO FOOD. https://t.co/qIgnkGGxSb pic.twitter.com/YpxWZvasup

Romney has deep ties to the state of Utah, although he formerly was the governor of his home state of Michigan. The 70-year-old took the helm at the 2002 Utah winter Olympics, turning what could have been a financial disaster into a successful event, even giving him the nickname, “the turnaround artist.”

Romney’s decision to run in Utah comes with the state’s long-standing senator, 83-year-old Orrin Hatch’s retirement. And although the state is decidedly conservative, politics watchers aren’t sure how it will play out. “I don’t know if I see a Sen. Romney vote that different than Sen. Hatch or the rest of Utah’s delegation,” Utah’s Lt. Gov. Spencer Cox told Vox.

“It’s a very conservative state, and I think Mitt Romney, at least through his last presidential run, the policy that he advocated for will be very similar.”

After losing the presidential race in 2012 against Barack Obama, Romney and his wife settled outside of Salt Lake City, building a home. He was the first Mormon to ever secure a presidential bid.

What do you think of Mitt Romney’s campaign announcement? Let us know @BritandCo!