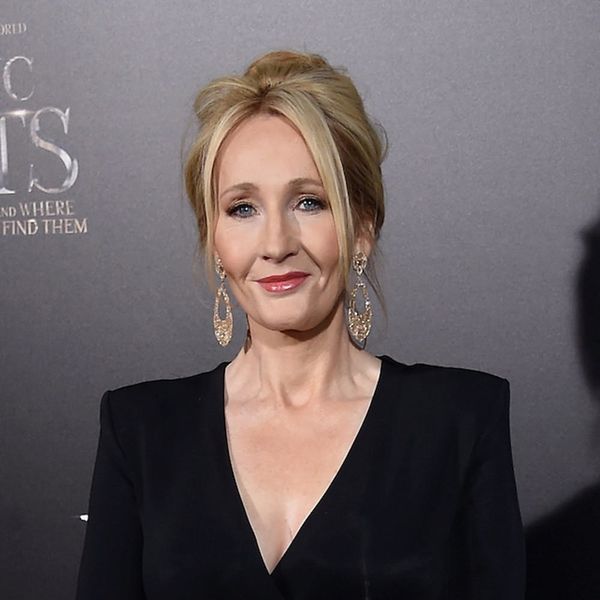 1. It should come as no surprise that many are reacting with disappointment and worry to President Trump’s decision to pull the US out of the Paris Climate Accord. And it should also come as no surprise that JK Rowling, who never shies away from speaking her mind or engaging in political issues on Twitter, was dishing straight fire as she tweeted the cover of German tabloid Berliner Kurier. The cover says “Earth to Trump: F**k you!” To which Rowling said, “Very much enjoying the German press at the moment.”

Amazing.
Rihanna bows to LeBron then hits a dab and small waves a Warriors fan telling her to sit down.
💀 pic.twitter.com/q0IyIPIbGK

2. Rihanna totally stole the show sitting courtside at the first NBA finals game last night. First of all, let’s just say that the only bucket list that should exist in life now is to go to a Cavs/Warriors game with Rihanna. Early in the game, ESPN announcer Jeff Van Gundy proved NO one is immune to the coolness of Rihanna when he freaked out, saying, “Rihanna just walked in front of me. Are you kidding me?” She also made her allegiance very clear when she BOWED to LeBron James and chirped a Golden State Warriors fan (seen above). AND she heckled Kevin Durant during some of his free throws, yelling “BRIIIICK.” Other celebs like Jay Z (no Beyonce!) and Kevin Hart were around too, but Rhi’s antics were all anyone (see: us) cared about.

Wait reading online about some chick I'm dating Megan something. Not true never even met her or heard of her before

3. Rob Kardashian claims that not only is he not dating Mehgan James, but he has no idea who she is. Kardashian is attempting to squash the rumors that he and Blac Chyna were off again and that he had moved on to Mehgan James with a pretty iconic tweet. “Reading online about some chick I’m dating,” he wrote. “Not true. Never even met her or heard of her before.” James also retweeted it. LOL.

What would you do if you found out a friend was stealing from you?

4. And speaking of Kardashian drama, Khloe says one of her friends is STEALING from her. Khloe tweeted asking fans if she should “cut off the friendship and let God handle it? Or would you go the legal route?” with a friend she reportedly found out was stealing from her. She reassured them it WASN’T BFF Malika, though many jumped to that conclusion. Whoever this snake is will very likely be dealt with appropriately (AKA: Dragged on social media). (Photo via Alberto E. Rodriguez/Getty)

Thank you for being a part of our journey. Sensates forever. pic.twitter.com/SClwiY3rwy

5. Netflix has canceled Sense 8 and fans are suuuuper unhappy about it. The Netflix original, whose second season just went up in May, is officially done, even as Cindy Holland, vice president of original content for Netflix, says it was “everything we and the fans dreamed it would be: bold, emotional, stunning, kick ass, and outright unforgettable.” Fans of the show echoed Holland’s praise of the show’s diversity and LGBTQ representation, pointing out that the first day of Pride Month might not have been the best time to pull the plug on the show. The editor of The TV Junkies even said it felt like a slap in the face.

6.Quote of the day: “I look forward to the day when a person is never judged, discriminated or feared for their sexuality.” Selena Gomez pens a beautiful Pride Month love letter as part of Billboard’s Pride Month series.

What does Pride Month mean to you? Let us know @BritandCo!