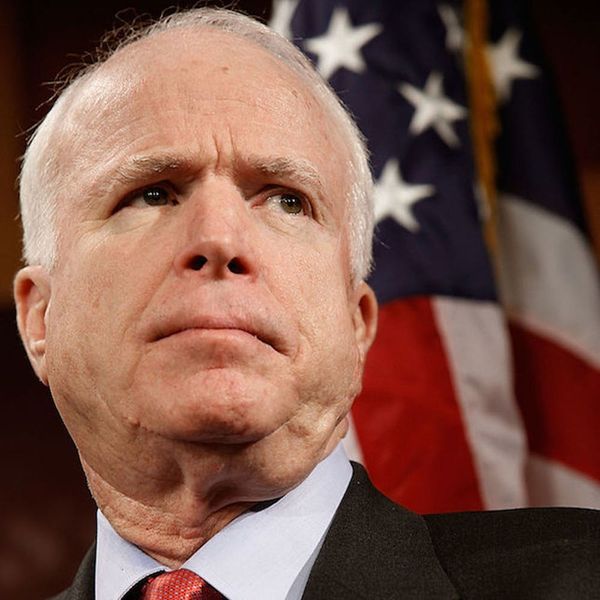 Senator McCain’s announcement leads this morning’s top news stories. Check out that and more below in the Thursday Morning Buzz.

1. Senator John McCain has been diagnosed with brain cancer, his family announced in a statement. The tumor, a very aggressive type of cancer known as a glioblastoma, was discovered when the senator had surgery to remove a blood clot from his eye. Reactions from other politicians (such as Barack Obama) and public figures poured in for the former presidential candidate via Twitter, and his daughter, Meghan McCain, tweeted a very emotional statement after the news was revealed. “It is an experience familiar to us, given my father’s previous battle with cancer — and familiar to the countless American families whose loved ones are also stricken with the tragedy of disease and the inevitability of age,” she wrote. “He is my strength, my example, my refuge, my confidante, my teacher, my rock, my hero — my dad.” McCain is recovering from his initial surgery “amazingly well,” according to the family, as they consider further treatment options. (h/t New York Times, photo via Chip Somodevilla/Getty)

2. Princess Charlotte giving her first diplomatic handshake is the cutest thing you’ll see all day. As the Royal Family continues their tour of Poland and Germany this week, Princess Charlotte and Prince George continue to steal the show. Landing in Germany, George was so clearly over it (like any four-year-old would be!), while Charlotte was all business, giving her first diplomatic handshake and totally stealing the spotlight in the process. Too. Cute. (h/t Twitter Moments)

As long as I have a play, Jennifer Lawrence has a place to puke. 🙌#honored #getwellsoon #iloveyou #1984onBarfway #spewbagsnotincluded

3. Olivia Wilde is #honored that Jennifer Lawrence threw up during her play because female friendship is the best. J. Law recently went to check out the Broadway production of 1984, starring Olivia Wilde and Tom Sturridge, and had to run to the lobby to, er, barf, according to Page Six. After hearing about it, Wilde tweeted that as long as she has a play, “Jennifer Lawrence has a place to puke.” She even added that she was #honored by it. Lawrence reportedly caught a stomach flu from her nephews, but she should take comfort in the fact that the show’s production effects and gruesome scenes have had audiences fainting and throwing up for a while now. (h/t Elite Daily)

4. Paige Davis will return to host TLC’s Trading Spaces reboot! What’s better than the return of this OG fave home design show? The return of its cheerful host! “I’m so excited, because you probably already heard the news that TLC is bringing Trading Spaces back, but guess what else? I also am coming back!” Davis said in a video announcement. “I am back at TLC, back home back where I belong, and I am so thrilled.” Us too! The Trading Spaces reboot will film in Los Angeles, Atlanta, and Baltimore and plans to premiere in 2018. (h/t ET, Bryan Bedder/Getty)

5. Jersey Shore‘s Deena Cortese has the scoop on why Ronnie wasn’t at the reunion. If you saw the epic Jersey Shore reunion in the form of a Burger King commercial (just trust us, it’s so good), you probably noticed that one main cast member was missing — Ronnie Magro. In a new interview with Us Weekly, Deena Cortese said that she, Snooki, JWoww, Sam, Pauly D, Vinny, and the Situation are planning for the next phase of the reunion in a group chat, but that they don’t keep in close touch with Magro and aren’t sure of his status with the project. “I’m sure he’d be willing to sign on,” Cortese said. “We just all haven’t spoken to him. I think Vinny’s the only one that really talks to him.” Cortese went on to say that if he were to join, she’s confident there would be no drama between him and ex-GF Sam. “Sam is the happiest I’ve ever seen her, so I think she would be just fine if Ronnie is there.” Time will (hopefully!) tell. (h/t Us Weekly, photo via Frederick M. Brown/Getty)

6. Quote of the day: “Independence is happiness.” Susan B. Anthony

Do you consider yourself independent? Let us know @BritandCo!