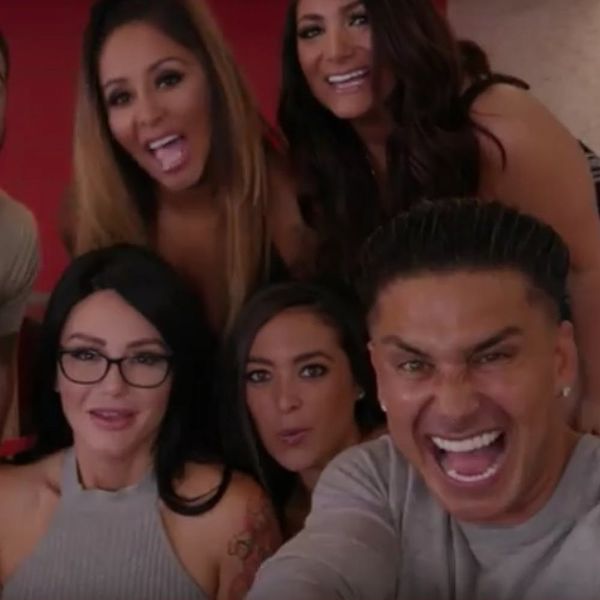 Talk about toying with our emotions! While we’ve been dreaming of a possible Jersey Shore reunion (and gathering all the info we could on reports that the cast had been spotted together again), the people behind the scenes have been working on something we would have never, ever expected. It’s a reunion, all right. But the gang hasn’t returned to the beach or taken on a fab new locale. Instead, they’ve gathered for a quick bite… at Burger King.

“The best part about this right now: Nicole thought she was going to Brooklyn because we kept texting each other ‘BK,'” Jenni “JWoww” Farley says in a video of the group outing, with Nicole “Snooki” Polizzi adding, “So I’m like, ‘Oh yeah… I don’t know where Brooklyn is.” Thankfully for her, they had a different destination in mind.

Sitting down for a family-style dinner to try out BK’s Chicken Parmesan sandwiches, the crew — Farley and Polizzi, along with Mike “The Situation” Sorrentino, Pauly D, Deena Cortese, Vinny Guadagnino, and Sammi Giancola — took no time at all to fall back into their old banter.

There’s talk of new boobs (oh my!), new kids (we’re well aware of Snooki and JWoww’s mothering ways), an upcoming marriage (congrats, Deena!), and *somebody* who’s trying for a baby, with a proposal planned in the next few months. Eee!

With lots of laughs and lots of love around the table, it’s pretty clear that these friends are totally ready for a FULL reunion ASAP. And it sounds like there may be one on the way: TMZ reported Thursday that there’s a reunion special slated for August, and Sorrentino teased in an interview with Page Six that “there’s definitely more to come.”

What do you think about this Burger King Jersey Shore reunion? Let us know @BritandCo!