Edible Water Blobs = the Water Bottles of the Future 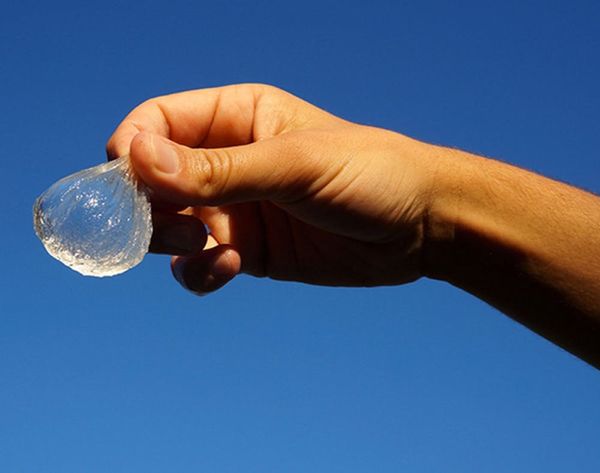 Yes, that thing that kind of looks like a giant clear Gusher (or at least that’s how we imagine the experience of imbibing H2O with it would be like) might replace your Dasani bottles someday. Its name is Ooho! which is also probably the sound you made when you saw this, admit it.

While Amazi is an app that wants to help you “Yelp” the nearest water container fill-up and Treeson is a bottle made from plants that can be mailed back to its maker for recycling, Ooho! is a “bottle” you can eat. It took home one of the top honors at the 2014 Lexus Design Awards, but its potential benefits go way beyond its look. Sure that little blob is cute, but it could contain the wave of the future.

You know when they get all fancy on Top Chef and use molecular gastronomy to make food that looks weirder than it probably tastes? Ooho! uses a similar technique, one called “spherification” to shape spheres (also see: “blobs”) from liquid. A compound made from brown algae and calcium chloride creates a gel around the water. While the sphere forms, the water is frozen. During that time you could make it bigger and the ingredients stay in the membrane surrounding the liquid.

Ooho! offers an edible and biodegradable alternative to plastic and each can be made for about two cents. Two cents!! Cheap, edible water containers are environmentally-conscious alternatives to the plastic bottles currently lining coolers and filling up landfills — and with production costs that low, they could help solve our global water crisis on a larger scale.

Plastic is bad. Let’s stop drinking water and other liquids from it, k? Until you can sip (or bite?) from Ooho! — Share below how you have cut down on plastic and other environmentally-unfriendly practices!

Lisa Raphael
In her past professional lives, Lisa has served the masses as the Editorial Director at Brit + Co, Bieber Whisperer at J-14, Golden Girls Fan Club Prez at Lifetime and Talk Show Host Understudy to Katie Couric. Now, she's taking on the sports world at The Relish, teaching Hairography 101 in her spare time and will forever be trying to fill the hole Zayn Malik left in her heart.
Design
Health
Design