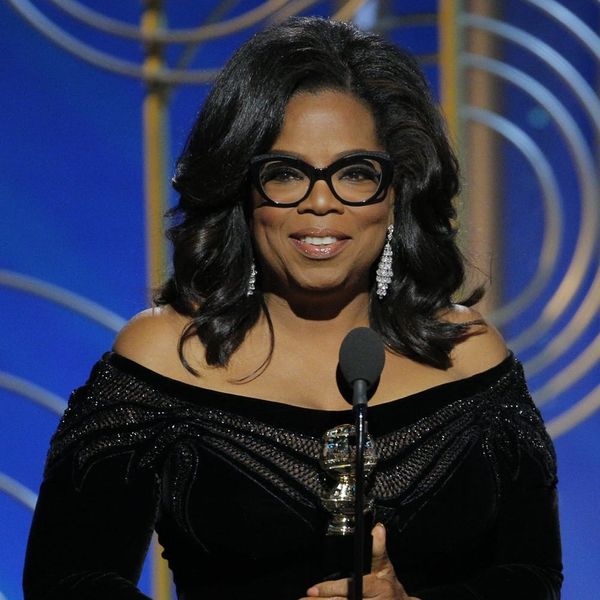 This year’s Golden Globes honored legend and A Wrinkle in Time star Oprah Winfrey with the Cecil B. DeMille Award — a lifetime achievement honor given annually by the Hollywood Foreign Press Association. In a year of strong political statements, Winfrey’s acceptance speech not only flawlessly encapsulated today’s current political and cultural climate, but also brought her role as America’s true queen full circle.

“It is not lost on me that, at this moment, there is some little girl watching as I become the first Black woman to be given [this] award,” Winfrey said, after sharing her memories of watching Sidney Poitier win his Oscar and, later, the Cecil B. DeMille honor.

“So, I want all the girls watching here, now, to know that a new day is on the horizon!” she added at the end of her speech. “And when that new day finally dawns, it will be because of a lot of magnificent women, many of whom are right here in this room tonight, and some pretty phenomenal men, fighting hard to make sure that they become the leaders who take us to the time when nobody ever has to say ‘Me too’ again.”

The crowd at the Golden Globes gave her a (well-deserved) standing ovation, but they weren’t the only ones moved by her impassioned and rousing speech. Fans watching from home lost their collective minds on Twitter, with #Oprah trending just behind #GoldenGlobes.

Everybody still trying to recover from Oprah's sermon like pic.twitter.com/yXjkUkRqeP

@Oprah! You are so loved by all of us. Thank you for all the years of sharing yourself with the world. 🇺🇸❤️ #Oprah #BELOVED

#Oprah has become such a pop-culture staple that it’s easy to take for granted just how important and influential she has truly been over the past quarter century. Bravo. #GoldenGlobes

that was so powerful, my heart burst open. thank you #oprah🙏🏼

I’m so inspired I don’t know how to function. #OPRAH

In her speech, Winfrey thanked the women, like her mother, who lived a lifetime of suffering because, “They had children to feed and bills to pay and dreams to pursue. They’re the women whose names we’ll never know. They are domestic workers and farm workers. They are working in factories and they work in restaurants and they’re in academia, engineering, medicine, and science. They’re part of the world of tech and politics and business. They’re our athletes in the Olympics and they’re our soldiers in the military.”

Let me tell you this room is still vibrating like electricity from that speech. #OPRAH #micdrop #TimesUp #MeToo #GoldenGlobes

Not surprisingly, the speech reignited pleas that she run for office in 2020.

Our president is giving her state of the union.

I'm ready to slap a sticker that says "A New Day Is On The Horizon, #Oprah 2020" on my car, laptop, water bottle, and everything i mf own

*me walking in to cast my vote for President Oprah Winfrey 2020* pic.twitter.com/hrPhNaSQQH

If that speech doesn’t make you want to change the world, nothing will. #Oprah #oprahforpresident

What did you think of Oprah Winfrey’s speech? Tell us @BritandCo!

Kat Armstrong
Kat has been a writer, social media maven and mom for longer than she's willing to admit. She's also spent time in front of and behind the camera, interviewing celebs, politicians and acting as a producer for fashion and artistic photography shoots. When she isn't writing for various orgs and publications, she's hanging with her kids, husband and French Bulldog, Peter, in Toronto, Canada.
Golden Globes
Celebrity News
Golden Globes