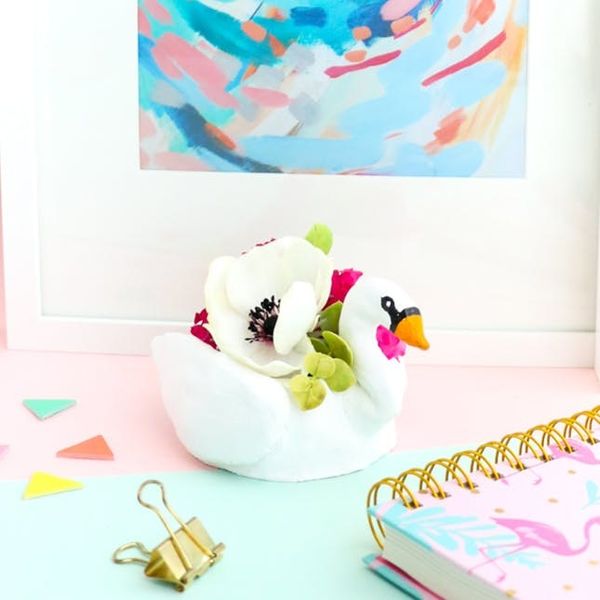 'Tis the season for pool lounging with giant inflatable birds, unicorns, and colorful loungers. In honor of our favorite summer activity, we're busting out all the mouthwatering treats, seasonal decor (can you say Christmas in July?), and adorable-but-functional home accessories inspired by these party-ready DIYs. Ready, set, float!
DIY Flamingo Float Cooler: When you're not lounging on your giant bird, try using it as a floating beverage cooler. Your friends will thank you for the easy access. (via Studio DIY)
DIY Pool Float Pumpkins: Okay, okay, it's not time for pumpkins just yet, but think of the possibilities! You can also give your planters a seasonal makeover using the printable elements. (via A Joyful Riot)
DIY Pool Float Swan Vase: While flamingos are trendy, the elegance of the swan will shine year-round on your desk. (via A Kailo Chic Life)
DIY Pool Float Ornaments: Start making these bad boys now. That way you'll have all of your Christmas crafting out of the way before Thanksgiving. (via Brit + Co)
DIY Pool Float Dog Costumes: For your next pool party, get the pets involved in the decor scheme. Your pooch will look v. on trend with a unicorn flotation device. (via Sugar & Cloth)
DIY Pool Float Cakes: Don't have access to a pool? Not to worry! Create the illusion with colorful treats for the dessert table. (via Aww Sam)
DIY Pool Float donuts: Being crunched for time before the big potluck does not have to spell disaster. Grab some donuts at the store and trick them out to look like a flock of flamingos. (via Craftberry Bush)
DIY Printable Pool Float Wrapping Paper: This is hands-down the best option for wrapping a gift. (via Bespoke Bride)
DIY Printable Party Invites: When you want the look without getting glue or glitter involved, try these printable party invites. (via Fun 365)

Show us your project by tagging us on Instagram + using hashtag #iamcreative!

Ariel Garneau
Ariel loves color, bold design, and eclectic decor. She goes by many names including "color decor wizard” and is also the voice behind PMQ for two (www.pmqfortwo.com) where she creates interiors and decor that are renter-friendly and creative.
DIY Projects
Home DIY
DIY Projects Summer Party
More From Home DIY

Create An Inviting Entryway With These Pro Tips

How to Make the Ultimate Brit-Approved Edible Garden