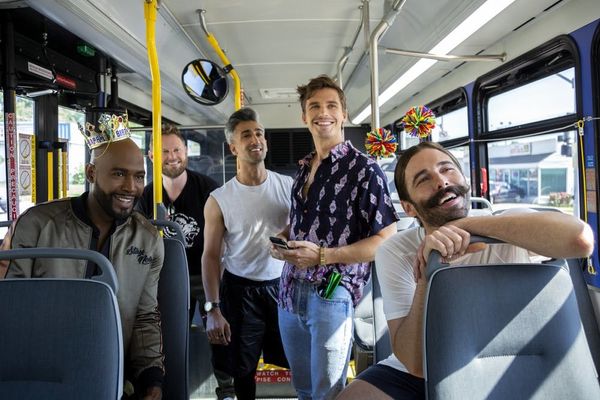 Can you believe? Season 3 of Queer Eye finally has a premiere date! After revealing back in July that the Fab Five — Bobby Berk, Karamo Brown, Tan France, Antoni Porowski, and Jonathan Van Ness — were leaving their base in Atlanta, Georgia, to make over some lucky people in Kansas City, Missouri, the show announced this week that the new episodes will hit Netflix on March 15. Even better: They shared the big news with a preview of Carly Rae Jepsen’s new song, “Now That I Found You.”

“WE’RE BAAACK HENNYS!” the Queer EyeTwitter account wrote on Wednesday, February 13. “Get ready to L<3VE YOURSELF! Queer Eye 3 launches March 15. HUGE thanks to @carlyraejepsen for this exclusive preview of her *NEW BOP*, ‘Now That I Found You.'”

In the accompanying video, Jepsen’s song plays over a group chat between the Fab Five. “What are you zaddies doing for Valentine’s Day?” Karamo texts his costars.

Tan replies with some suggestive emojis, Antoni says he’ll be listening to CRJ (AKA Carly Rae Jepsen), and Bobby texts simply, “Yasssss.” JVN, meanwhile, announces, “Imma love myself hennies! #selfcare” — which looks like it may be an important theme in the new episodes, given the tagline, “Love Your S3lf.”

WE'RE BAAACK HENNYS! Get ready to 💗 L<3VE YOURSELF! 💗 Queer Eye 3 launches March 15. HUGE thanks to @carlyraejepsen for this exclusive preview of her *NEW BOP*, "Now That I Found You.” 😘 pic.twitter.com/Dmj3ygXnhV

Jepsen retweeted the announcement, adding, “CAN’T WAIT. Love you guys!!” She also let fans know that they can pre-save “Now That I Found You” on Spotify and Apple Music.

The first two seasons of Queer Eye are streaming now on Netflix. Queer Eye season 3 will be followed by the special Queer Eye: We’re In Japan episodes, which will show the five stars sharing their message of self-care with a whole new audience.

Are you excited for Queer Eye season 3? Let us know @BritandCo!

Desiree O
Desirée O is a ‘Professional Bohemian’ who loves anything and everything related to the arts, entertainment, and pop culture. She ADORES being a ‘Newsy’ for Brit + Co, covering all of the latest tidbits of awesomeness that you want to read about. When she’s not writing, she’s either making messy art, going on long adventurous walks with her camera, or poking around over at bohemianizm (http://www.bohemianizm.com/). You can find out about Desirée O and her work at http://DesireeO.com/ or follow her on Twitter @DesireeO.
Netflix
Streaming
Netflix Streaming
More From Streaming