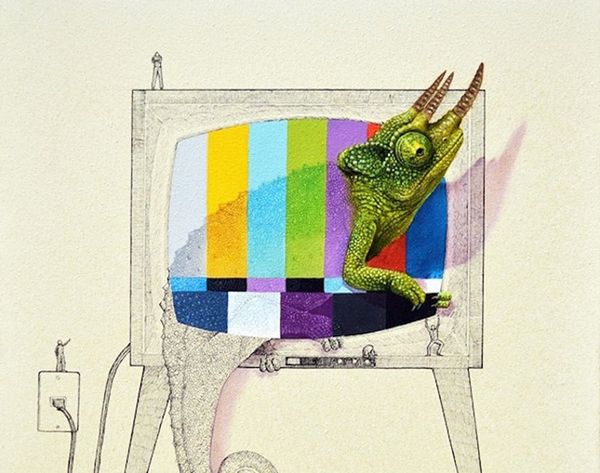 Ever wonder how the zebra got its stripes? Maybe tiny Lilliputians dropped black ribbons on from a tiny airship. How did the cheetah get its spots? Perhaps they’re just temporary tattoos. Why are flamingos pink? Oh right, they’re in the middle of a color war, getting pummeled by pink paint cannons. Mexican artist Ricardo Solis explores these theories beautifully in his series of incredible illustration work. Let’s take a look.

Solis’ illustrations are whimsical portraits of larger-than-life animals, each one giving a possible explanation for certain little mysteries of nature. Throughout his career, the Guadalajara-based artist has been inspired to create art that captures a child’s imagination and sense of wonder.

The work depicts everything from stone-carved elephants to balloon-like hippos to tape recorders inside a parrot. The vividly illustrated animals against the tiny black and white drawings of the people puts humans into a creator role, but at the same time they’re dwarfed by their own engineering feats and by the awesome power of nature.

You can check out more of Solis’ work on his website and even buy prints there starting at $24.

Which one is your favorite? Let us know in the comments!

Annie D'Souza
Annie is the founding father and editor-in-chief of The Midwestival and a long-time jean-on-jean enthusiast.
Art
Home News
Art Illustration