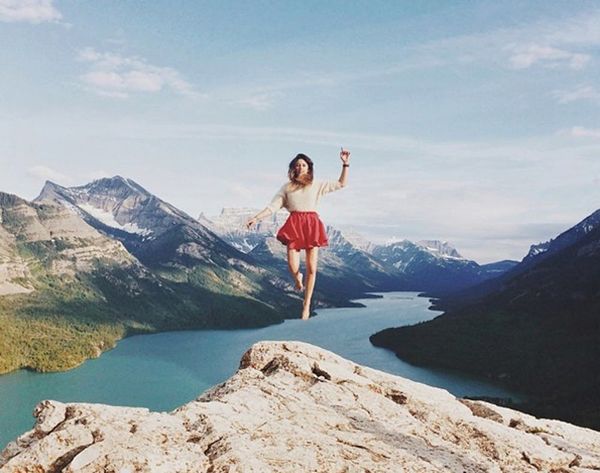 How often do you escape into the great outdoors? And we’re not talking about the courtyard at your office. Not many of us go on nature retreats as often as we should, but now you can briefly get there from the comfort of your desk chair. A quick glance at these nature-filled Instagram feeds will give you major wanderlust — we promise. The serene landscapes, abandoned beaches and close-ups photos of wildlife will have you wishing for a nature walk, STAT!

1. Stefano Unterthiner: This guy gets up close and personal with the faces of wildlife for a living. He photographs for National Geographic and he’s a zoologist, so he’s as pro as pro gets. (via stefanounterthiner)

2. Andrea Dabene: This photographer dubs herself as a “French girl living in Vancouver.” How adorable is this jumping photograph?! (via andreadabene)

3. Santiago de Hoyos: It seems that Vancouver, BC is a place of endless nature gold, and de Hoyos photographs some of its most intimate moments. He doesn’t just stick to Vancouver, though. He has collections of photos from his many travels. (via santiagodehoyos)

4. Dan Tom: Based in San Francisco, Tom travels the world finding serene scenes that look like they’re straight out of a storybook. From the looks of it, he’s a big fan of crashing waves and peaceful fog. Who isn’t? (via dantom)

5. Eelco Roos: Get a glimpse of lovely nooks and crannies around the globe, all from your phone with Eelco Roos’s traveling feed. (via croyable)

7. Brenton Clarke Little: Brenton’s lens goes beyond forests and oceans, he finds nature in urban landscapes that often get overlooked. Scroll through his feed and you’ll soon find that nature is everywhere, people! (via (brenton_clarke)

8. Keith Ladzinski: Another NatGeo photographer, Ladinski got his start taking rock climbing photos. Now his talents cover priceless moments in nature of all kinds, all over the world. (via ladzinski)

9. Mia Foley: Photographing from Kaua’i, Hawaii, Foley has us convinced that there’s nowhere we’d rather be. She also does wedding photography… maybe this calls for a destination wedding? (via themeep)

10. Cory Richards: When it comes to getting the shot, Richards knows what it takes. In 2012 he got Natinoal Geographic’s Adventurer of the Year Award in 2012, and since then, he captures glimpses of nature that make us want to be full-time explorers. (via coryrichards)

11. Alex Strohl: Who needs city skylines when you have tree skylines with a backdrop of mountain silhouettes? Strohl is a Madrid-born Frenchman who’s not only known for his breathtaking photography, but also for co-founding a creative agency. Will the talents never end?! (via alexstrohl)

12. Stephanie Crown: Adventuring we will go! Stephanie takes you from bridges to beaches and gets some risky shots that will leave you dumbfounded. (via stephaniecrown)

15. Scott Rankin: We’re just going to pretend that we live in this Instagram feed where we stand in giant ancient forests and wade in lakes that go past the horizon line. See ya later, gator! (via othellonine)

16. Chris Burkard: Frozen or flowing, water is the name of the game for Burkard. Get ready to dream about lake and ocean adventures. He also does videos! (via chrisburkard)

17. Thomas Peschak: Ready for a swim? This photographer is the Director of Conservation for the Save Our Seas Foundation. His love of the ocean is clear in his aquatic feed. (via thomaspeschak)

18. Rebecka Sipe: We wish everyday of our vacations looked like this. After all, sometimes the best part of having time to relax is having time to adventure. (via rebeckasipe)

19. Cole Rise: Sometimes the sun provides the ideal lighting and Rise has a perfect eye for it. Looking at his feed, you might think that it’s always golden hour. (via colerise)

20. Chris Rod: It’s no secret that Portland, Oregon is a place of lovely landscapes, but the spots captured by Chris Rod seem profoundly untouched. You can even buy prints of his work here. (via chrisjrod)

21. Poler Stuff: Of course we had to throw in a stylish, rugged brand for outdoor gear. This line of beanies, bags, tents and more explores the great outdoors for a living… and looks great doing it. (via polerstuff)

Did we miss one of your faves? Let us know down below!

Katelan Cunningham
Katelan is a tech junkie obsessing over all things startup and design. She has entirely way too many apps on her phone and is no stranger to binge-watching. She accidentally fell in love in Los Angeles and that’s where she currently lives, writes, tweets and grams.
Apps
Tech
Apps Instagram Roundup Photography
More From Tech