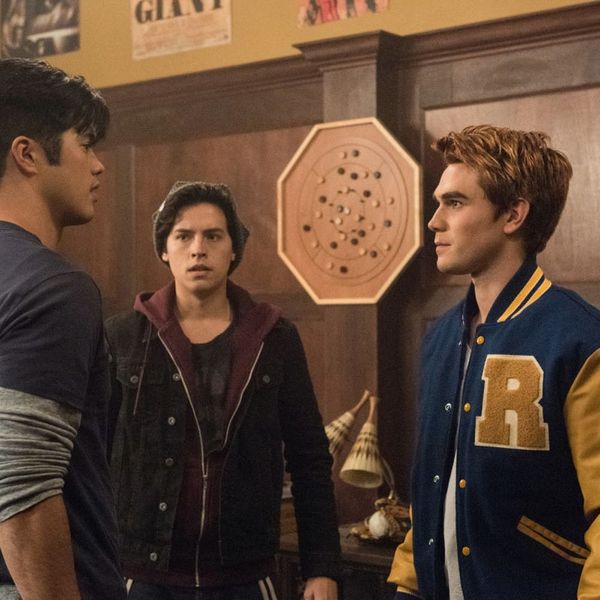 **Warning: This post contains spoilers, so if you haven’t watched the latest episode of Riverdale, stop reading!**

Our Riverdale story this week begins with Jughead writing about Jason — remember, we found Jason’s body in the river at the end of last week’s pilot? Archie can’t sleep, because he can’t stop thinking about the fact that he heard gunshots the night of Jason’s death. So he texts Betty, who turns him down. Cold, Betty. Super cold.

#HotArchie (seriously, did you SEE those abs?) goes running, because what are gratuitous abs without showing them off? And where does he show up? Miss Grundy’s house. She doesn’t want anything to do with his guilt, and to make matters worse, Archie’s dad gets on his back for sneaking out the next morning.

In other news, Betty’s parents continue to be the definition of what kids today call “cray.” She tries to talk Betty out of seeing Archie again, and Betty promises she won’t…but then she goes and asks him to walk her to school. Yeah, mom doesn’t want her to speak to him. But she still wants to be BFF. Betty gets a gold star for talking about her feelings AND going against her mom.

Jughead talks to Archie about Jason, because he has Suspicions (with a capital S) about where Archie was the night Jason died. See, Jughead and Archie were supposed to go on a roadtrip 4th of July weekend, but Archie bailed at the last minute. To be fair, Jughead has a right to be a little wary, since he doesn’t know about his friend’s “activities.” But let’s talk about the other BFFs for a second. Betty has flowers waiting for her – from Veronica. AND VERONICA HAS MAGNOLIA CUPCAKES because “there’s no wrong the right cupcake can’t fix.” She’s also booked them mani-pedis. I know Betty’s lukewarm about the girl, but can Veronica be MY BFF?

Veronica ends up partnering with Betty in chem class, while Archie partners with Cheryl. He wants to know if the police have any leads on Jason’s killer, and he’s worried how she’s going to be since they’re dissecting frogs and her brother’s body is being autopsied. No biggie. Cheryl’s fine. In fact, she’s amazing.

Veronica, Betty and Kevin find Archie at lunch. Veronica asks him to play a song, which is totally dreamy, except it’s the song from the dance and Betty just cannot handle it. She still wants them to be together, and it hurts, okay? She tells him she’s not okay and runs off, and Archie tries to run after her, but is stopped by Principal Weatherbee. Apparently even HE’S suspicious of Archie. This leads Jason back to Miss Grundy. He needs to know what he’s protecting, and that it (a.k.a “this relationship”) is worth it. Their intimate moment is overseen by Jughead, and, well…you know that’s not gonna end well.

😍 When he can play guitar and sing.😍 #Riverdale pic.twitter.com/WT22S3I5xc

At cheerleading practice, Cheryl is in prime Alpha mode. Veronica is still trying to be BFF with Betty, who lets loose that she’s still pissed at Veronica about what happened at Cheryl’s party. Archie and her were FINE before she came along (spoiler alert: they probably weren’t). Cheryl interrupts them arguing and in a fit of spite, Betty invites Cheryl for pedicures instead. They end up back in Betty’s house playing with makeup, where Cheryl suddenly gets very interested in Polly’s relationship with Jason. Betty is confused at why she’s asking all these questions about her sister, until she realizes it’s because Cheryl believes Polly killed him. So Betty yells at her to get out of her house. GO BETTY.

Veronica ends up walking home with Archie, who stops at Pops to pick up dinner and finds Veronica there hanging out with her mom. Veronica laments about how her and Betty are supposed to be U + ME = US, and Archie ends up talking about his history with Betty and how they’ve known each other practically forever. He tells her the story of how he was going to get held back in the second grade, and because Betty couldn’t stand the fact that they wouldn’t be in the same class, she tutored him every day. When he passed his test, he kissed her and asked her to marry him. Well, I don’t know about you, but I can’t blame Betty NOW for her feelings.

When Archie gets home, Jughead is waiting for him. He tells Archie that he saw him with Miss Grundy, and with that info out of the bag, Archie tells him what really happened on July 4th. While THAT tense conversation is happening, Betty asks her mom why she was so against Polly and Jason being together. She thinks it’s time to see Polly. Mom gives that idea a hard no.

Betty and Veronica kind of make up the next day, in that Betty admits that Veronica was right. Veronica tells Betty that Archie might not LOVE her, but he sure as hell loves her. Later, while the group is hanging out, Reggie gets high and mighty about Jason’s death. He starts picking on Jughead, and Archie rushes to his friend’s defense, which results in a nice black eye. (Don’t worry, he’s still pretty). Archie ends up talking vaguely about his situation with his dad when he gets home, who encourages him to do the right thing. Listen to Luke Perry, Archie!

Riverdale’s pep rally is happening in the rain, because rain or shine, the show must go on. It’s basically an excuse to show #HotArchie in his nice football uniform. Archie warns Miss Grundy he’s going to right his wrongs, and tells her it’s her choice if she wants in. He makes up with Jughead like the bros they are, and then the Riverdale Vixens do an absolutely awesome routine to “Sugar, Sugar” by Josie and the Pussycats. I have no takeaway from this scene except for the fact that I would like an ENTIRE CD of their songs, please and thank you.

The night’s going pretty well until Cheryl sees Archie run out in her brother’s old uniform. For her, it’s the breaking point – the real breaking point. These aren’t fake emotions, y’all. She runs away from the pep rally (a sure sign this is real, because Cheryl would never pass up an opportunity for attention) and Veronica ends up comforting her. Betty catches them and afterwards, she tells Veronica she realizes she’s genuine – not many girls would do what she did.

Veronica makes her vow that she’ll never let a man come between them, so when Archie and Jughead show up at Pops for their bro burgers, the girls let them join and everything is happy and cute and wonderful. We know that can’t last, right?

Yeeeeeah. The next morning, Archie goes to Principal Weatherbee’s office to do his deed but he’s beaten to the punch by Weatherbee and the sheriff coming out of the office to interrupt chem class. They have a verdict on Jason’s body from the autopsy. Cheryl stands, ready to take the fall – literally, as she claims she’s guilty of killing her brother.

Too easy? Way too easy. Besides, the big news is that the autopsy showed that Jason was shot and died a WEEK later than when he disappeared with Cheryl. So yeah… this town’s got some secrets. And I need to know them all.

What did you think of Riverdale’s second episode? Let us know over @BritandCo.