17 of the Wildest Royal Wedding Fascinators of All Time 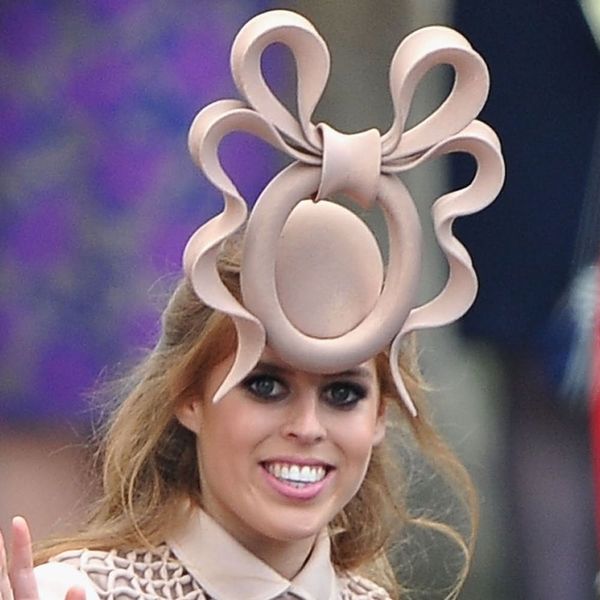 It’s almost time for the Royal Wedding of Meghan Markle and Prince Harry (mark those calendars for May 19)! While all eyes will undoubtedly be on the wedding dress Markle chooses , we’re also amped for that other British wedding guest style staple — the fascinator. Scroll through to check out some of the best royal wedding headpieces of all time!
Kate Middleton: The Duchess of Cambridge led the fashionable fascinator charge in this elegant, feathered white and brown piece while attending the wedding of Laura Parker Bowles (Prince William's stepsister) and Harry Lopes. (Photo via Tim Graham/Getty)
Princess Beatrice of York: The royal's structural bow headwear by Philip Treacy for Kate Middleton and Prince William's wedding later sold for $131,000 in a charity auction on eBay. (Photo via Pascal le Segretain/Getty)
Princess Märtha Louise of Norway: Princess Märtha Louise was easy to spot in the crowd at Crown Prince Felipe and Letizia Ortiz's wedding thanks to this bright style. (Photo via A. Jones, J. Whatling, J. Parker, + M. Cuthbert/UK Press/Getty)
Tara Palmer-Tomkinson: The late TV personality offered up a unique take on the fascinator with a bright blue vertical diamond piece by Philip Treacy at Prince William and Kate Middleton's wedding. (Photo via Samir Hussein/WireImage/Getty)
Princess Beatrice of York We couldn’t take our eyes off of the Philip Treacy butterfly creation Princess Beatrice wore to celebrate the marriage of Autumn Phillips to Princess Anne and Prince Philip Duke of Edinburgh’s son, Peter Phillips, back in 2008. (Photo via Ian Mcilgorm/AFP/Getty)
Zara Phillips: Princess Anne’s daughter brought the drama at Prince William and Kate Middleton’s nuptials in a black oversized Philip Treacy piece with a giant bow accent. (Photo via Chris Jackson/Getty)
Laura Parker-Bowles: Prince William and Prince Harry’s step-sister, Laura Parker-Bowles, went for the gold with her leaf-like topper at HRH Prince Charles and mom Camilla Parker Bowles’ ceremony. (Photo via Tim Graham/Getty)
Queen Elizabeth II: We love this fabulous purple number she wore to the wedding of her son, Prince Philip, to Sophie Rhys-Jones in 1999 the most. (Photo via Ian Waldie/AFP/Getty)
Victoria Beckham: Beckham looked, well, posh while attending Prince William and Kate Middleton's wedding in her miniature navy Philip Treacy fascinator paired with a Victoria Beckham frock and Louboutins. (Photo via Mike Marsland/Getty)
Pippa Middleton: Kate’s sister sported her own brightly-colored fascinator to the wedding of Lady Katie Percy and Patrick Valentine. (Photo via Chris Jackson/Getty)
Princess Eugenie of York: Check out the feathers on this Philip Treacy look! (Photo via Samir Hussein/Getty)
Kate Middleton: For sister Pippa Middleton’s wedding, the duchess wowed in a blush pink topper that matched her dress. (Photo via Max Mumby/Indigo/Getty Images)
Camilla Bowles Bowles stuck to her signature feathered style while witnessing the vows of Princess Anne’s daughter, Zara Phillips, and husband Mike Tindall. (Photo via Getty)
Naomi Campbell: She made for a stunning guest in peach at the wedding of Prince Albert II and Princess Charlene of Monaco. (Photo via Dan Kitwood/Getty)
The Duchess of Kent: She was pretty in pink courtesy of this delicate floral design. (Photo via Chris Jackson/Getty)
Princess Mary: An oversized flower was all the embellishment Princess Mary of Denmark needed to make a statement at the Monaco Royal wedding for Prince Albert II and Princess Charlene. (Photo via Venturelli/Getty)
Princess Eugenie of York: The royal waved to onlookers in a neat brown and white piece while headed to see Zara Phillips and Mike Tindall say their vows. (Photo via Mike Cuthbert/UK Press/Getty)

Which royal fascinator was your favorite? Cast your vote over @BritandCo.

Which royal fascinator was your favorite? Cast your vote over @BritandCo.

Nicole Briese
Nicole is the weekend editor for Brit + Co who loves bringing you all the latest buzz. When she's not busy typing away into the wee hours, you can usually find her canoodling with her fur babies, rooting around in a bookstore, or rocking out at a concert of some sort (Guns N' Roses forever!). Check out all her latest musings and past work at nicolebjean.com.
Celebrity Style
Wedding Style
Celebrity Style Celebrity Wedding Hats Royal Family Royal Wedding Style
More From Wedding Style