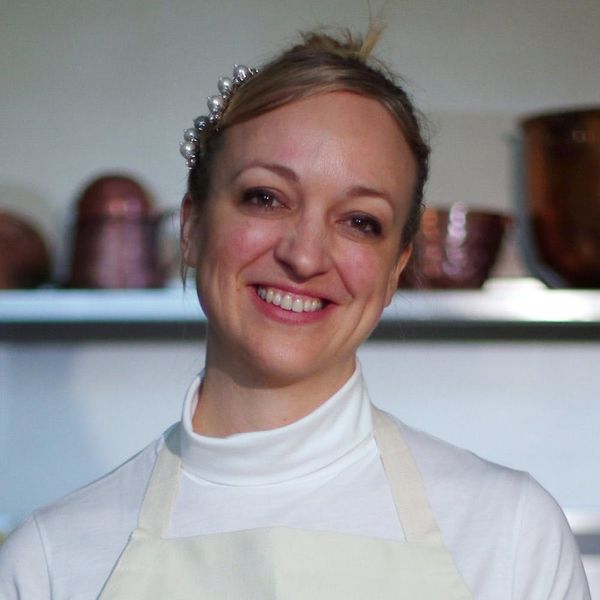 In a day full of sweet memories, perhaps this is the sweetest. Prince Harry and Meghan Markle’s royal wedding cake (or actually cakes) was revealed shortly after the newlyweds left St. George’s Chapel in Windsor.

The three treats feature 150 fresh and seasonal flowers, a mix of peonies and roses, nestled on the Swiss meringue buttercream. Each of the desserts sit on their own gold stand.

On Friday, the palace released the first photos of the couple’s wedding cake created by Claire Ptak, the owner of Violet Bakery in Hackney, London, and her head baker, Izaak Adams.

The pastry chefs were photographed decorating one of three cakes they whipped up in Buckingham Palace’s kitchen, a feat which took six people five days to create. Their four-layer creations consist of a lemon sponge base with Amalfi lemon curd filling and elderflower Swiss meringue buttercream frosting.

“It’s such an honor to be asked to do this,” Ptak said in a video for The Royal Family Channel. “For me, I’ve been baking since I was a little kid, and this is my dream to do. To be asked to do one of the most exciting cakes is really fulfilling and wonderful.”

For those looking to get in on the royal wedding fun at home (lemon-elderflower waffles, anyone?), the palace has shared the official recipe via Twitter.

The baking of the #RoyalWedding cake is under way! pic.twitter.com/b3jhwtOwOP

You’ll have to pare it down for your family size: Roughly 44 pounds of butter, sugar, and flour were used in the making of these bad boys.

What do you think of Prince Harry and Meghan’s cake? Share with us over @BritandCo.

Nicole Briese
Nicole is the weekend editor for Brit + Co who loves bringing you all the latest buzz. When she's not busy typing away into the wee hours, you can usually find her canoodling with her fur babies, rooting around in a bookstore, or rocking out at a concert of some sort (Guns N' Roses forever!). Check out all her latest musings and past work at nicolebjean.com.
Cake Recipes
Food News
Cake Recipes Royal Family Royal Wedding
The Conversation
Reviews:
More From Food News