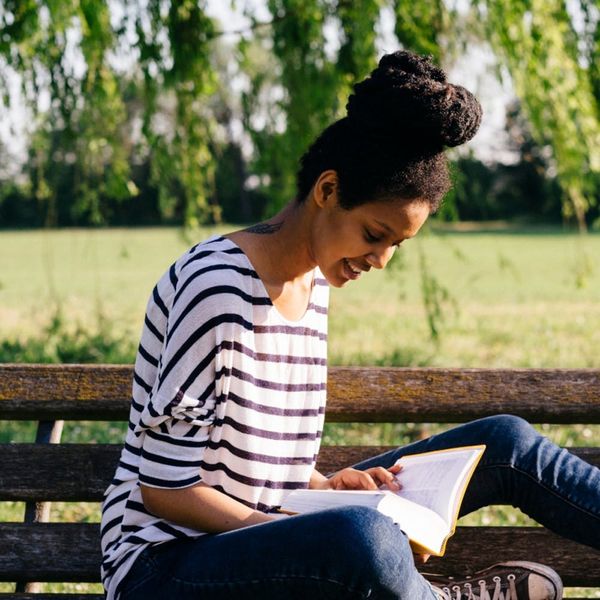 You might guess that fans of romance novels would come out best equipped for a successful relationship. Read enough sexy paperbacks and contemporary chick lit, and you’re bound to gain a pretty good understanding of what you’re looking for in a partner and how to realistically navigate dating, love, and marriage, right? Not so much. Fans of another genre — one that might surprise you — actually tend to be better prepared for successful coupling.

“What You Read and What You Believe” — a study from the University of Oklahoma published in the July 2018 issue of Psychology of Aesthetics, Creativity, and the Arts — investigated readers’ opinions on a series of unrealistic and potentially harmful ideas about romantic relationships. Respondents who had a lot of exposure to science fiction and fantasy books were less likely to give credence to several of these damaging beliefs than fans of other genres, including the ideas that disagreement is destructive, partners cannot change, people of different genders are inherently different, and partners should be able to read each other’s minds.

Given that speculative fiction is inherently built on worlds that are often quite unrealistic, it may come as a surprise that fans of these genres tend to have more reasonable expectations of their romantic relationships. But marriage and family therapist Justine Mastin — who specializes in working with the geek community — isn’t shocked by the news. “It makes a ton of sense that sci-fi and fantasy lovers would make better partners,” she says. “The basis of much sci-fi and fantasy is rooted in what is possible — pushing the envelope and exploring thinking outside the box, which indicates the kind of flexibility that serves folks well in relationships.”

According to Mastin, mainstream media and other pop culture genres typically portray relationships as very binary, with certain relationship behaviors always being bad and others always being good. Anyone who’s been in a long-term relationship knows that it’s rarely that simple when it comes to love. Mastin confirms that this binary “doesn’t serve everyone” and “in fact, doesn’t serve most people.” Speculative fiction sets forth worlds in which there are fewer rules — or at least different ones. Unicorns can coexist with warriors, age-old magic might govern the land, or we might be asked to envision how our own societies would change after hundreds or thousands of years of progress. When you read sci-fi and fantasy, there’s a sense that literally anything can happen… And isn’t that kind of the case in relationships too? Between you and your partner, there’s rarely a winner or a loser, or a final answer on what’s right or wrong. Instead, there’s room for compromise and a need for probing conversations in which both parties are open to all kinds of possibilities and solutions.

The subversion of standard stereotypes we can see in these genres also lends itself well to strong relationship skills. “Other genres tend to play into stereotypes about gender and relationships that encourage a kind of rigidity that does not serve people in the real world,” explains Mastin. While she admits that stereotypes do exist in certain sci-fi and fantasy books, speculative fiction often encourages and benefits from a general lack of traditionalism. As a result, fans might feel less bound by old-school gender dynamics or ideas about the so-called “perfect relationship” (LOL), leaving them open to figure out how things might actually work best for them and their significant other.

It’s not all magic and rainbows, though. Mastin notes that not all sci-fi and fantasy books are created equal and that some titles might actually encourage harmful romantic behaviors. More specifically, she cites a general toxic masculinity that exists within some parts of geek culture — that’s clearly not the healthiest influence for a relationship. Still, the University of Oklahoma data is interesting and gives us a unique peek into the overlap of the media we consume and our behavior in the real world. “I think that sci-fi and fantasy stories have so much to offer, but picking up The Lord of the Rings won’t immediately make a person a better partner,” Mastin reminds. “If folks are interested in exploring the world of sci-fi and fantasy, I would highly encourage it, since I do believe that the questions asked in this genre create the opportunity for questioning the way we view the world around us.”

How have your favorite books shaped your views on relationships? Tweet us @BritandCo!

Alli Hoff Kosik
Alli Hoff Kosik is a freelance writer who is passionate about reading, running, rainbow sprinkles, her lipstick collection, watching embarrassing reality TV, and drinking pink wine. She lives in Brooklyn with her husband and (in her dreams, at least) three golden retriever puppies. Listen to her talk books on The SSR Podcast.
Books
Creativity
Books Creativity Dating Relationship Advice Study
More From Creativity