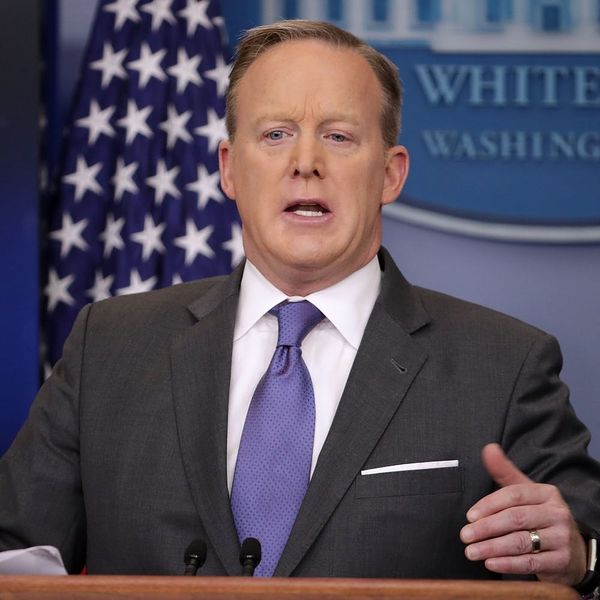 Sean Spicer really can’t catch a break lately, though that’s pretty much because he’s bringing it all on himself (as Melissa McCarthy and SNL just hilariously showed us). And while we’re getting used to President Trump’s Twitter outbursts (though really, SMH!), his press secretary’s latest flub-up has made him the target of unrelenting trolls.

Spicer has already found himself in a five-year Twitter feud with Dippin’ Dots and recently sent out multiple tweets that only contained eight random characters, which most folks believe were his passwords, but this time around, it’s Venmo that’s causing the press secretary a headache.

#PonyUp 🐴⬆ on Venmo to stretch that cheese further than it's ever stretched before...

For anyone who needs some quick deets: Venmo “is a free digital wallet that lets you make and share payments with friends. You can easily split the bill, cab fare, or much more.” Pretty handy, yes?

It’s also probably a good idea to keep your account private if you’re in a very public professional position, ya know, like press secretary to a rather controversial new president. Sean Spicer, however, has left his account public and yowza!

As soon as the public account was discovered, it (natch) went around the internet like a wildfire, and trolls have been taking full advantage, demanding payment for everything from the cost of Melania Trump’s stay in NYC to the education they feel he’s now made worthless.

I Venmo requested money from Sean Spicer for the imaginary bowling league we're in together pic.twitter.com/rptdVj3Svc

Honestly what gives @seanspicer I'm still waiting for you to complete my Venmo request https://t.co/mizmXwpIgI

Sean Spicer's venmo is public should I do this pic.twitter.com/28ekrGtMV5

What do you think about people trolling Sean Spicer’s Venmo account (and the fact that he left it public)? Tweet us @BritandCo!

Desiree O
Desirée O is a ‘Professional Bohemian’ who loves anything and everything related to the arts, entertainment, and pop culture. She ADORES being a ‘Newsy’ for Brit + Co, covering all of the latest tidbits of awesomeness that you want to read about. When she’s not writing, she’s either making messy art, going on long adventurous walks with her camera, or poking around over at bohemianizm (http://www.bohemianizm.com/). You can find out about Desirée O and her work at http://DesireeO.com/ or follow her on Twitter @DesireeO.
money
Politics
money Politics
More From Politics