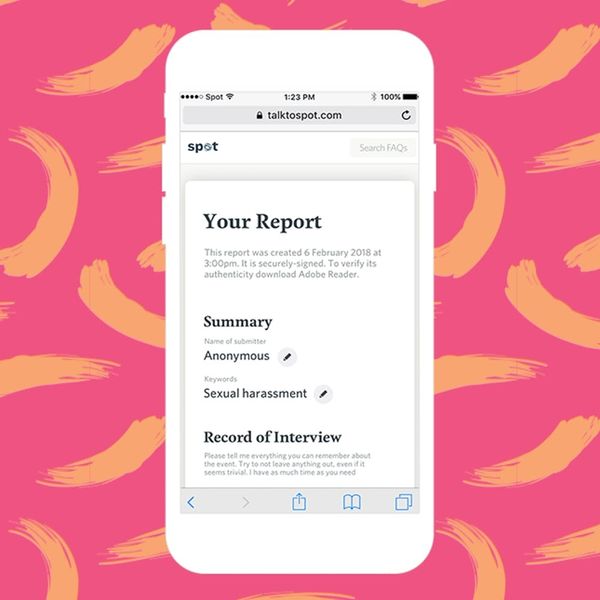 Sexual harassment has been at the frontline major media sources recently. While it’s difficult to hear everything that’s been going on behind-the-scenes, it has, in turn, generated awareness for these issues occurring in Hollywood, sports, and the office. The last of these three places motivated psychological scientist Dr. Julia Shaw, along with her co-founders Dylan Marriott and Daniel Nicolae, to put the power of prevention and detection directly into people’s hands.

Their site, Spot, is the first tool that will use AI capabilities to report workplace discrimination. With it, you can anonymously create and download reports and send them to an employer, an HR representative, a colleague, or even Spot’s research team. The key to all of this is ease of use and anonymity.

The inspiration for the site came from a study conducted by Dr. Shaw’s team where they found an overwhelming amount of workplace issues that go undetected. “We found that no matter which study you look at, most instances are never reported at all. At least 70 percent go unreported, with up to 97 percent going unreported for certain groups of people — including LGBT individuals, and those working in the service industry,” she says.

By using a proven effective technique called “cognitive interviewing” they developed a comfortable messaging-style interface that improves a victim’s or bystander’s memory to record each detail of the event as it happens. Users are then given a copy of the time-stamped chat to notify others as they please, giving them complete, unbiased control over the scenario. “Bots don’t judge. Spot will always keep things private, and will only share what you want it to,” adds Dr. Shaw.

The comforting news to all of this is that the app doesn’t store or profit from these cases, but it simply hopes to raise awareness of offensive office behavior and decrease the stigma around speaking up. As Dr. Shaw put it, “knowing that something inappropriate is happening is still better than not knowing at all. Silence can destroy company culture from the inside.”

The tool is free to the public and can be used regardless of if the consumer’s company is registered with it. The Spot website also has resources about discrimination and harassment for both employers and employees.

Will you try this app? Share your thoughts with us @BritandCo.