13 Haircuts to Try This Spring 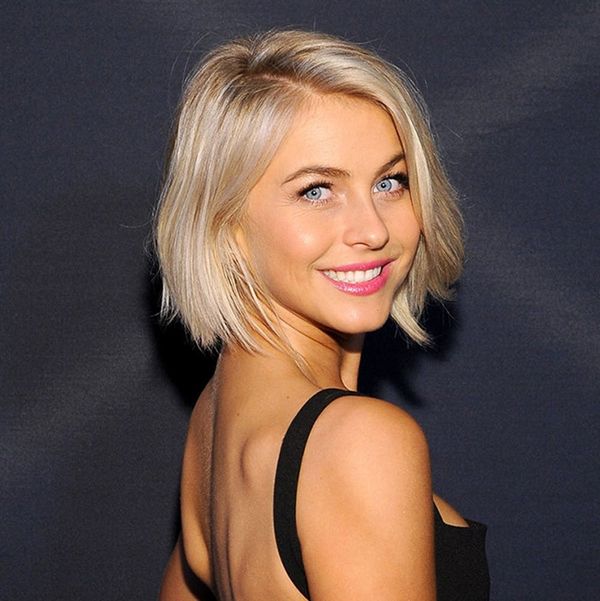 We’ve all reached that point at the beginning of a new season: You think your look is stale and you want to turn it up. Sometimes the fix is as quick as slipping into a new silhouette or trying a bolder shade of lipstick. But other times, it calls for a more drastic measure — a whole new ‘do, — and we’ve got the haircut inspiration right here. Scroll through to see celebs who rock some of the most popular hairstyles of the season, from the bold and blunt to the soft and layered, and get a glimpse of your totally on-trend transformation-in-waiting.

1. Bob: If you chopped off all your locks into a lob earlier this year and are looking for something new, copy Julianne Hough by going a little bit shorter into a charming bob. Keep angling minimal with just a few layers around the face. (Photo via Angela Weiss/Getty)

2. Pixie: Actress Lily Collins rocked a short ‘do similar to Julianne’s for awhile but apparently was looking for something a little more dramatic — and boy did she get it. This cut is edgy, glamorous, sexy and offers up some serious Victoria Beckham vibes. (Photo via Jon Kopaloff)

3. Lob: Looking for a low-maintenance cut? Try something similar to Margot Robbie’s same-length lob. Chopped right above the shoulders, this style looks best when it’s a little tousled. So go on ahead and welcome that bedhead. (Photo via Jason Merritt/Getty)

4. Bob With Bangs: Add a little something extra to Julianne’s short bob with fringe. To get Dakota Johnson‘s look, ask your stylist for choppy bangs that fall just below the eyebrow. (Photo via @dakotajohnson_anastasiasteele)

5. Blunt Cut: No matter what length, no matter what texture, a straight-across chop is in. When your hair has as much volume as Amandla Stenberg’s, the cut turns a geometric shape that’s insanely fashion forward. For thinner haired girls, the effect is a bit softer, but no less severe. (Photo via Jerod Harris/Getty)

6. The Rachel: For a fun, layered take on the ultra-popular, blunt lob, try Selena Gomez’s wispy style. Be sure to ask for some face framing layers in front and longer layers throughout. (Photo via @selenagomez)

7. Long Bangs + No Layers: Digging Margot’s look but want something a little extra? Copy legendary style maven Alexa Chung by incorporating long bangs that can easily be tucked behind the ears or pulled forward. (Photo via Dimitrios Kambouris/Getty)

8. The Undercut: If you’re really feeling like a change, take that bottom layer of hair and buzz it right off. When styled down, this look can remain pretty much undetectable, but pull it up into something like Rosamund Pike’s sleek bun and show off the unexpected style. (Photo via Jason Merritt/Getty)

9. The Swag: What happens when you mix thick, intentional layers with the of-the-moment bob? You get a breezy, ’70s-style chop like Taylor Swift’s. The choppy layers add an instant carefree edge to that ubiquitous shoulder-length cut. (Photo via Jason Merritt/Getty)

10. Face-Framing Layers: Mermaid hair never goes out of style, so take a cue from Gigi Hadid and add some sparse layers that softly frame your face. Think of it like a grown-out version of Taylor’s more heavily layered chop. (Photo via @gigihadid)

11. Baby Bangs + Blunt Cut: Rihanna is schooling all of us (even Beyoncé) on how to rock baby bangs with long hair. A graduated cut that adds subtle definition to the sides of your face makes the severe transition feel softer, while adding volume to the top of your head — like with her subtle, modern bouffant — ties the entire look (and it is a look) together. (Photo via Kevin Winter/Getty)

12. Long Wispy Layers: If you’re not ready to chop off those long locks, simply add in some long layers. Kendall Jenner’s varying lengths add just a touch of volume around her face while still remaining almost undetectable. (Photo via Joe Scarnici/Getty)

13. What Haircut?: Even though everyone around you is getting a bob, lob or some combination of the two, sometimes you’re just not feeling scissor-happy, and Zendaya shows how bombshell it can be to fly that lazy girl banner. With “meh hair” the universal envy this season, you can let it go — grease and all — then rally it in when you want to — in Zendaya’s case, by roping those luscious locks into gorgeous dreadlocks. (Photo via Jason Merritt/Getty)

What haircuts are you swooning over this season? Tell us in the comments below.