14 Ways to Master Personal Style, According to Tamu McPherson 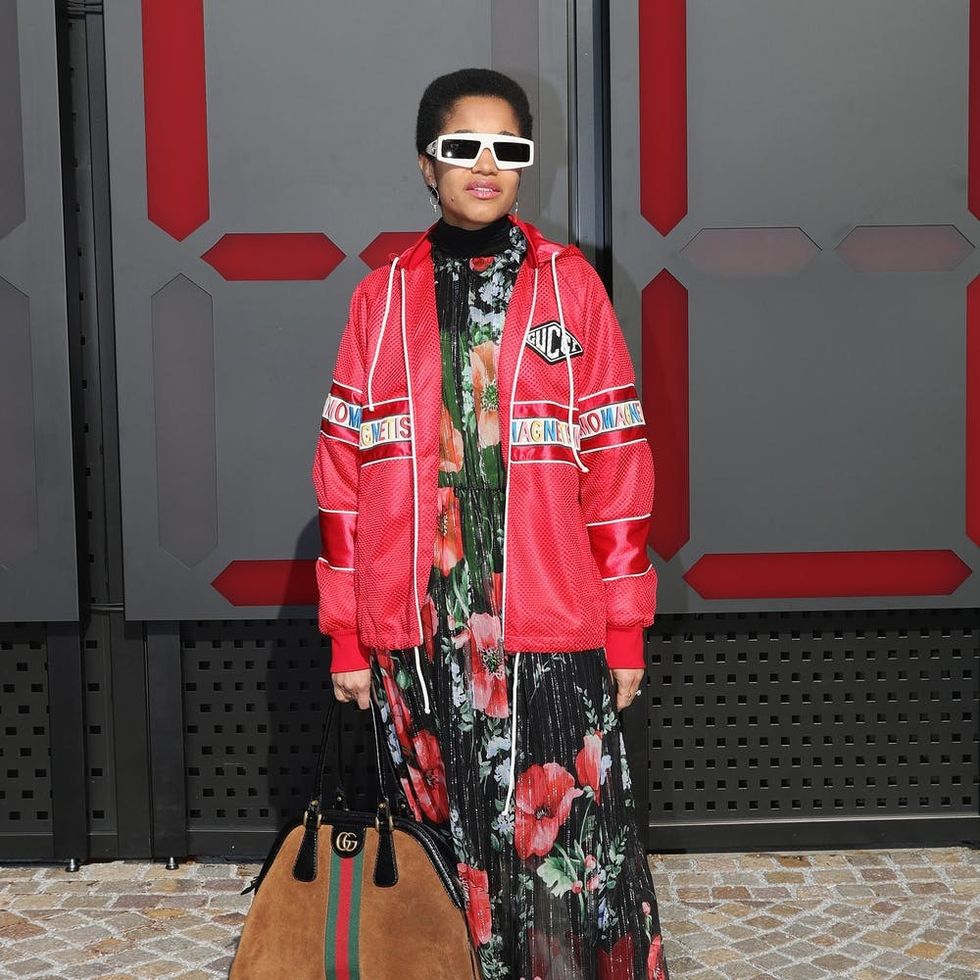 Tamu McPherson, a Jamaican-born street photographer and blogger behind All the Pretty Birds, is what we like to call a style champion around here. Perhaps it’s her juxtaposition of colors, textures, and prints, or maybe it’s her adventurous spirit that sets her apart from a generation of emerging influencers. With stints in both NYC and Milan (her current residence), she’s become as much known for her sporty aesthetic as her spot-on Italian-girl style. Have we piqued your interest yet? Keep scrolling for 14 of the tastemaker’s most groundbreaking looks to date, plus some style rules to swear by.

1. Dip your toes in color. When is McPherson not drunk on color? Never. The style chameleon gets it right with her color-clashing lewk consisting of a cautionary orange blouse and a violet wrap skirt. (Photo via Citizen Couture/Condé Nast via Getty)

2. Do the athluxury thing. You can take the girl out of New York City, but you can’t take the city out of the girl. The Milan Fashion Week regular balances out a retro track jacket and futuristic white shades with a romantic floral maxi for a defining look. (Photo via Vittorio Zunino Celotto/Getty Images for Gucci)

3. Fearless is Tamu’s middle name. As a rule of thumb, McPherson’s never more than an accessory or two away from being FROW-ready (note her “Protest” beanie, natch). Though don’t be mistaken; her leopard print coat and swishy metallic blue pleat skirt deserve major props too. (Photo via Astrid Stawiarz/Getty Images for Self-Portrait )

4. Invest in a dope pair of jeans. One minute she’s wardrobed in Gucci, the next she’s roaming around in a trusty pair of cuffed boyfriend jeans and a deconstructed blouse. A reminder that every exceptional #OOTD starts from the bottom up. (Photo via Melodie Jeng/Getty)

5. Show off your femme side. The range of McPherson’s style prowess knows no limits. She reveals her softer side in an ultra-femme sheer pink lace frock that’s not even the least bit frou-frou. (Photo via Elisabetta Villa/Getty)

6. Leave your (style) mark. It’s all about an outfit-elevating topper — hypnotizing chevron FTW — that can be spotted at least a mile away. (Photo via Kirstin Sinclair/Getty)

7. Confidence is your #1 accessory. McPherson could legit rock a brown paper bag and still be the queen of FASHUN. Here she takes the fast lane by opting for a racing-inpsired Pepto pink denim patchwork jumpsuit from Miu Miu. (Photo via Jacopo Raule/Getty Images for Miu Miu)

8. Test-drive every trend once. You name it, she’s probably already done it. Being open to the latest wave of DGAF fashion, whether it’s grunge or granny, sets this reigning street maverick and former attorney apart from the crowd. (Photo via Taylor Hill/Getty)

9. Be a little (or a lot) extra. Daytime shimmer in the form of a sequined blue bomber? You don’t have to tell us (or McPherson) twice. (Photo via Vittorio Zunino Celotto/Getty Images for Prada)

10. Let your patent topper do the talking. There’s something to be said about a slick patent coat that’s equal parts fierce and traffic-stopping. For double the slayage, Dries Van Noten white ankle booties aren’t up for debate. (Photo via Romain Mayoussier/Getty Images for Kenzo)

11. Wear your personality on your sleeve. Every time we catch glimpse of McPherson having a maximalist moment or sporting her signature mid-heel “GG” loafers, we do a double take. (Photo via Venturelli/Getty Images for Bvlgari)

12. Play up your sock game. Don’t forget to look down… at this boss babe’s sock game, that is. Notice her Tiffany blue kitten heels and sporty branded tube socks from Nº21 serving up no shortage of street style bait. (Photo via Melodie Jeng/Getty)

13. A hands-free bag is your BFF. Being a mum of one, a street photog, and an It girl translates to functional (read: not frumpy) fashion on the go. Nine times out of 10, you’ll find McPherson saddling a hands-free crossbody bag en route to her next show. (Photo via Kirstin Sinclair/Getty)

14. Go bold or go home. The Pretty Bird founder dabbles in monochromatic shades of lemon yellow and chartreuse for a ‘gram-worthy getup that’s not show off-y in the least. It’s her beige coat and nude Valentino studded heels that ground her look. (Photo via Jacopo Raule/Getty)