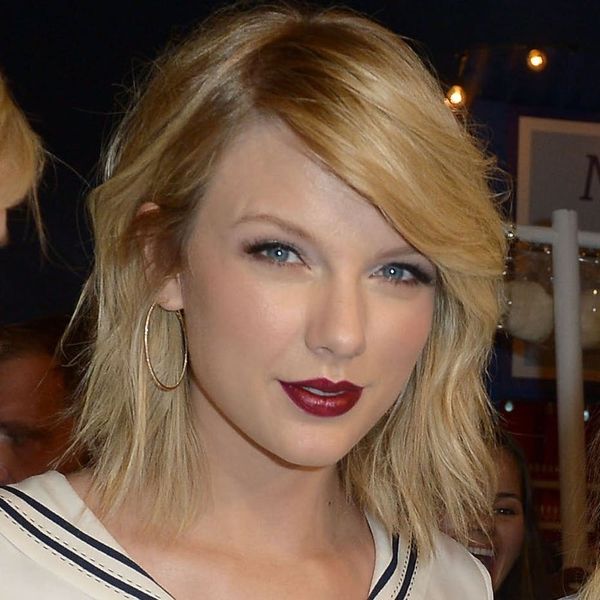 We’ve barely had time to decode all of the crazy intricate references in Taylor Swift’s “Look What You Made Me Do” video, but already, the 27-year-old has given us a brand new track to dissect. After teasing the second single off her upcoming album, Reputation, during Saturday night’s Alabama-Florida college football game, Tay dropped “…Ready For It?” at 8am sharp this morning, and boy, is it a doozy!

In a total 180 from the vengeful tone of “LWYMMD,” this new tune takes a turn for the steamy. Naturally, everyone wants to know who inspired the track, with one seemingly obvious subject in mind: Could it be that Swifty’s new man, 26-year-old actor Joe Alwyn, has already joined the ranks of Joe Jonas and Harry Styles by being immortalized in the Grammy winner’s song catalog? It sure sounds like it!

While Elle points out that the track was co-written with Ali Payami, Shellback, and Max Martin, meaning the instant hit could very well be written from a multi-perspective view, signs point to the singer’s new beau from the very first line: “Knew he was a killer first time that I saw him,” she croons (ICYMI, the social activist was spotted with the British actor at the screening of his war film, Billy Lynn’s Long Halftime Walk in which he plays a private: i.e. a killer).

She goes on to talk about a man “Younger than my exes but he act like such a man, though” which would also implicate her new flame, who is just 26 compared to Calvin Harris’ 33 years and Tom Hiddleston’s 36. What’s more, the upbeat track seems to dismiss her former boyfriends completely, saying, “Every lover known in comparison is a failure, I forget their names now, I’m so very tame now, ever be the same now.”

A second glance into #reputation...ready for it? Link in bio.

Given the fact that the pair has managed to keep their relationship super quiet (“I can be a phantom holding him for ransom”), many are also pointing to lines like “No one has to know” and “I know I’m gonna be with you so I take my time” as a nod to Swift’s new approach to dating.

By the same token, “Baby, let the games begin,” may be referencing the fact that they’re finally ready to go public and that the young actor has to brace himself for all the paparazzi games that will follow. In that case, the “it” in the single’s title would most likely relate to the media blitz that comes with dating the young pop star.

We, for one, are DEFINITELY ready for it: Welcome back, Tay!

Listen to the track in full here.

What do you think “…Ready For It?” is all about? Tweet us @BritandCo.