Taylor Swift’s “Look What You Made Me Do” Video References, Decoded 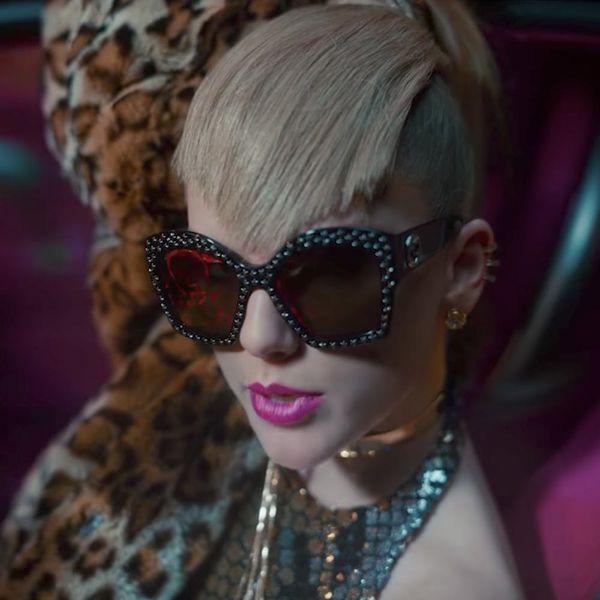 With Taylor Swift’s sudden social media blackout a week ago, followed by three days of cryptic snake teasers and a long-awaited album announcement and single release, fans have been on quite the emotional rollercoaster. The ride continued on Sunday night, when Swift debuted her “Look What You Made Me Do” music video in all its glory at the 2017 MTV VMAs.

The video — which was directed by Joseph Kahn, the man behind Swift’s “Bad Blood” and “Blank Space” videos —is packed with subtle and not-so-subtle references to moments in Swift’s life (and a few videos by other artists). From start to finish, here’s a look at the symbolism, hidden messages, and Easter eggs in “Look What You Made Me Do,” as spotted and decoded by fans and critics.

The video opens with a shot of a grave bearing the words “Here Lies Taylor Swift’s Reputation,” a nod to both her album title and the spoken interlude, during which Swift says, “Sorry, the old Taylor can’t come to the phone right now. Why? Oh, ’cause she’s dead.” We also get a glimpse of another grave with the name Nils Sjoberg, the pseudonym Swift used as a writing credit for ex-boyfriend Calvin Harris’s hit song “This Is What You Came For.”

The video continues with “the old Taylor” burying another version of herself (i.e., digging her own grave). The zombie Swift is decked out in the blue dress she wore in her “Out of the Woods” video, and the Swift she’s burying wears her 2014 Met Gala dress, showing that the sweet, bubbly Swift truly is gone. (As fans have pointed out, there are shades of Michael Jackson’s “Thriller” video here too.)

Cut to Swift in a bathtub, bathing in jewels. This is a multi-level Easter egg. While some fans believe it’s a potshot at Kim Kardashian’s violent robbery in Paris last fall, others have a less sinister explanation. During a performance at the GRAMMY Museum, Swift talked about the inspiration for the character she plays in her “Blank Space” video, saying, “Every single article had these descriptions of my personality that were very different from the actual personality, and my first reaction was like, ‘That’s a bummer. This isn’t fun for me.’ But then my second reaction ended up being like, ‘Hey, that’s actually kind of a really interesting character they’re writing about: She jet-sets around the world, collecting men, and she can get any of them, but she’s so clingy that they leave, and she cries and she gets another one in her web and she traps them and locks them in her mansion, and then she’s crying in her marble bathtub surrounded by pearls.'”

Swift isn’t just surrounded by pearls in this tub, though. Next to her right shoulder is a single dollar bill — which just happens to be the amount she won in her sexual assault case earlier this month.

SHE IS BRILLIANT LOOK AT THE SINGLE DOLLAR IN THE BATHTUB THAT SHE WON HER TRIAL FROM pic.twitter.com/jWBZ403EUT

The next scene shows Swift in a throne room filled with snakes. In keeping with the serpent imagery from her teasers last week — no doubt a reference to the snake emoji trolling she faced as a result of her feud with Kim Kardashian — she also wears several pieces of snake-themed jewelry as she sips a cup of tea served to her by, yes, a snake. The columns in the room are adorned with the phrase “Et tu Brute,” the famous line uttered by the titular character in Shakespeare’s Julius Caesar as his best friend betrays and fatally stabs him. This scene clearly goes out to those who have wronged Swift in the past (and anyone who might cross her in the future too).

Next we see Swift in a car crash. Some have connected this scene to a line from her song “Red” (widely believed to be about Jake Gyllenhaal), where she sings, “Lovin’ him is like driving a new Maserati down a dead-end street.” Others can’t help but notice that this version of Swift looks a lot like Katy Perry. Swift is holding a Grammy as she gets out of the car, though, and Perry has never won a Grammy.

One fan suggested the crash scene might also be a nod to the media’s treatment of her: “Is this a reference to all the times that everyone stood back, took pictures, and laughed at her when she was beaten down?” (Swift apparently “liked” the tweets about this theory, so take that how you will.)

After the crash, the video cuts to Swift eating a luxurious meal of lobster and Champagne as she sings, “I don’t like your kingdom keys / They once belonged to me / You asked me for a place to sleep / Locked me out and threw a feast,” which fans believe is a reference to Perry’s song “Bon Appetit.”

Moving on, we see “crazy cat lady” Tay robbing a “streaming company.” This is likely a reference to the open letter she wrote to Apple Music back in 2015, when they wanted to offer fans free streaming while not compensating artists. The scene is also rife with other references, such as the cat masks her band of robbers wears during their heist. (Perry used similar cat masks in her “Dark Horse” video.)

From the robbery, we move into “Squad U,” which appears to be a dig at the claim that all of her friendships are manufactured.

This is where we start to see the “new” Swift emerge. After “Squad U,” she storms into a room with eight backup dancers, each wearing Tom Hiddleston’s now-infamous “I heart TS” tank top. Why eight dancers? Some people think it’s because she’s had eight famous boyfriends over the course of her career.

After this very Beyoncé-esque moment, “new” Swift climbs to the top of the heap as her old selves clamor for space and attention below her.

They get their moment in the spotlight at the end, though, when Swift lines up several of her past selves in an airplane hangar. They take a bow, then proceed to rip into each other.

“Stop making that surprised face. It’s so annoying,” zombie Tay snaps at “You Belong With Me” Tay. The Swift clones continue to mock the narrative around the singer, with biker Tay quipping at one point, “There she goes, playing the victim, again,” which is a clear reference to detractors saying that Swift victimizes herself to curry favor with the public. The video closes with Swift’s 2009 VMAs clone saying, “I’d very much like to be excluded from this narrative” — the exact quote she offered after the whole Kardashian-West phone call drama on Snapchat — while everyone else yells, “SHUT UP!”

Not all of the references are personal, though. Swift’s video also seems to pay homage to music videos from other artists. Twitter users have spotted possible allusions to Lady Gaga’s “Telephone,” The Backstreet Boys’ “I Want It That Way,” and Madonna’s “What It Feels Like for a Girl.”

What do you think of Taylor Swift’s new video? Tell us @BritandCo!

Kat Armstrong
Kat has been a writer, social media maven and mom for longer than she's willing to admit. She's also spent time in front of and behind the camera, interviewing celebs, politicians and acting as a producer for fashion and artistic photography shoots. When she isn't writing for various orgs and publications, she's hanging with her kids, husband and French Bulldog, Peter, in Toronto, Canada.
Taylor Swift
Music
Taylor Swift
More From Music